MONTREAL — There are calls for the rules to be reviewed after a female student at a high school in Quebec City was strip-searched by school officials.

The 15-year-old student at Neufchatel High School was searched last week, after school officials suspected she may have been selling drugs.

A spokesperson for the Lester B. Pearson School Board told Global News that no strip searches had ever taken place within one of its schools.

Fo Niemi from the Centre for Research-Action on Race Relations told Global News that strip searching of students by teachers or school administrators is treading in dangerous waters and the policy was ill-conceived and needed to be studied.

“It raises a lot of constitutional and civil rights issues, especially in schools with a diverse racial population,” he said.

“Particularly when school staff are not trained to do this type of search like police officers are.

“It raises issues of integrity, privacy, illegal and abusive searches – where do you draw the line? I’m not sure school staff would welcome that sort of power.”

In fact, the student has said that she asked to phone her mother before the search but was told she was not permitted.

The girl’s mother told the Journal de Montreal that she considered the search “excessive” and the family is considering legal action.

“For us, what’s important is to respect the person and also to ensure that everything happens in a legal manner,” the province’s Education Minister Yves Bolduc said Tuesday in Quebec city.

“There are reasons where we must conduct a strip search and what is important is that the law is followed.” 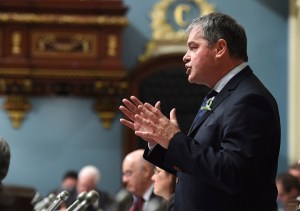 The De la Capitale School Board released a statement on Tuesday to clarify certain elements of the “intervention.”

“In accordance with the policy of police presence in schools, which governs all provincial schools, the school administration, with parental authority, must ensure students attending our schools can do so in a safe and healthy environment.”

School administrators said they followed official policy guidelines published by the Quebec provincial police, which says schools are allowed to conduct a strip search if there is a reason to do so.

The resource also provides schools with rules to follow when conducting a strip search:

The school board also noted in its statement that although the situation was exceptional and took place within established parameters, it intends to review its internal processes.

Quebec provincial police, with the support of Canada’s National Crime Prevention Strategy (NCPS), created a resource in 2005 (republished in 2010) to help school administrators and parents.

Managed in collaboration with the provinces and territories, the NCPS provides a policy framework for the implementation of crime prevention interventions in Canada.

Read it below [in French]:
Story continues below advertisement
View this document on Scribd
Related News
© 2015 Shaw Media