How to pull off an underground film shoot

It isn’t easy holding a camera steady when you’re dangling from a rope in an icy, pitch-black cave.

But cameraman François-Xavier de Ruydts, better known as “Fix,” somehow managed to make it work. The adventure photographer specializes in shooting unusual activities such as skiing and climbing expeditions in remote locations and, in this case, caving.

Just getting equipment to the cave is a workout, in and of itself.

“There is no time when you can rest and stand, or sit down, or anything.”

“It’s on the side of a mountain, it’s like a three-hour pretty high hike to get there and then you have some rock-climbing to get to the entrance of the cave,” de Ruydts said in an interview after the trek. 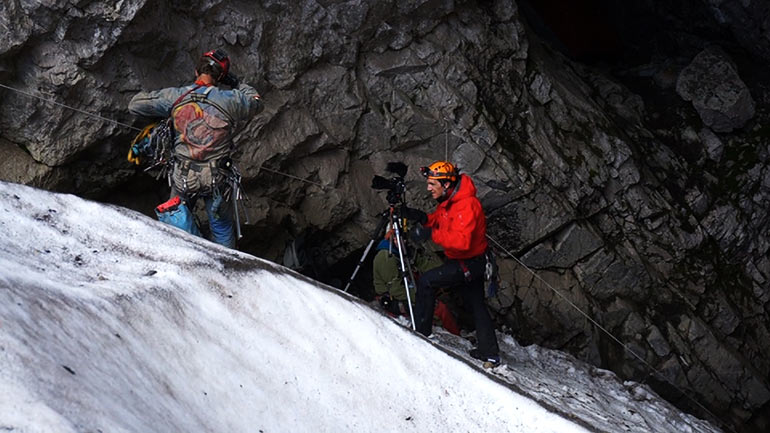 Videographer François-Xavier de Ruydts sets up a shot of Nick Vieira near the snowy mouth of the cave.

Once de Ruydts and his rigger Damien Briguet got inside, “the main problem of this cave was the angle of the slope. You have to imagine one huge chamber at a 45-degree angle. Everything is covered in ice. And the length of the slope, it’s almost 200 metres of sheer ice, and shooting down the mountain,” he said.

“It’s of course pretty hard to film in there, and the main reason is you’re always hanging on a rope. There is no time when you can rest and stand, or sit down, or anything. So everything is attached to ropes, including the tripod and the cameras. So you always have to secure everything.”

He and Briguet had to set up a separate set of rope lines, so they could film alongside the cavers.
How do you steady a tripod on slick, angled ice? Tennis balls. Inspired by stories of how wool socks would stick to ice, de Ruydts attached a tennis ball to each leg of his tripod.

“It worked really well, actually. It really gripped the ice. It allowed me to get steady shots.”

And then there’s the issue of light. As in, there isn’t any: The crew needed to illuminate a pitch-black cavern using only what they could carry with them up a mountain and down an ice chute.

De Ruydts actually designed his own lights. They were easy to carry and ran on long-lasting batteries, he attached them to the cavers’ backs as they descended to illuminate the rock and ice formations behind them.

“I remember having up to three or four lights on me, climbing,” Briguet said. “I felt like a Christmas tree, just climbing through the cave.”

There were a few hairy moments: Every time climbers punch their crampons into a wall of ice, they risk dislodging potentially deadly shards on people below.

Despite the danger, both Briguet and de Ruydts say they loved being in the cave.

“The most amazing is actually this feeling of being in the heart of the earth,” de Ruydts said. “You’re really in the belly of Mother Earth, right? And there’s some kind of maternal feeling to it, to be in there.

“And it’s so quiet. There’s no sound except water dripping: plick, plick, plick. And it’s the only thing you can hear. And your heartbeat, that’s all.” 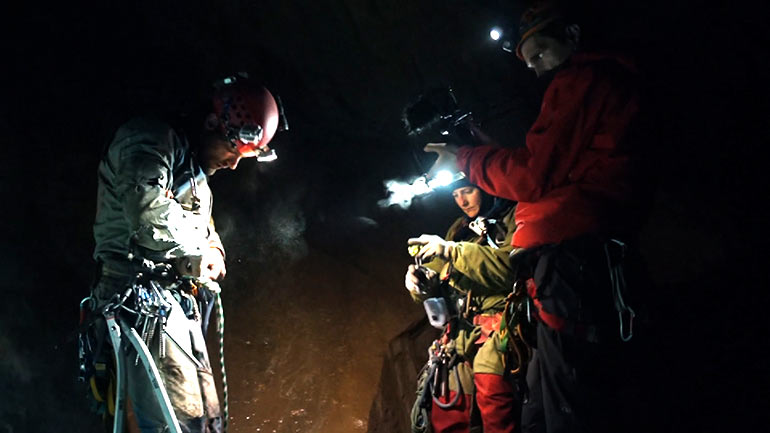