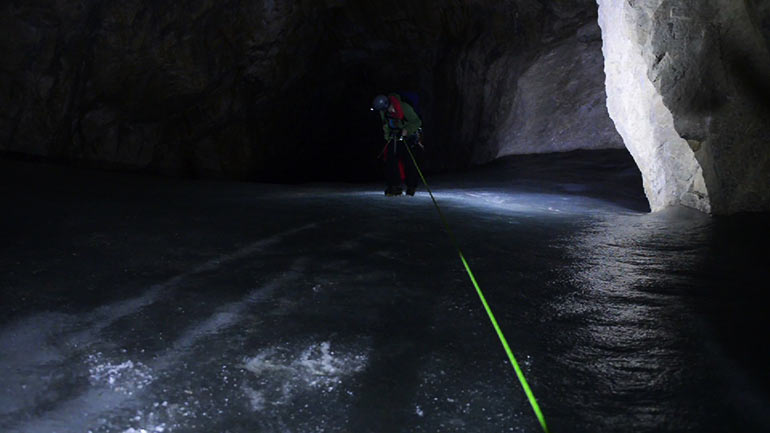 The team treks its way back up the mountain and back to the mouth of Booming Ice Chasm.
Today, the mission is to map a cave almost no one else has entered, much less surveyed.
It’s more complicated than it sounds.

Once they’ve inched their way down the ice slope, rappelling on crampons to the bottom of the cave’s main chamber, they’ll measure its size and check for side passages – where do they go? How deep, how long, what angle are they?

To do this properly, the cavers climb frozen waterfalls, shimmy through narrow crevasses and wade through an icy underground lake – all armed with headlamps and surveying equipment.

Hurting yourself on the hike up is bad, but you could still be rescued by a helicopter. No such luck if you’re in trouble inside the frozen cave.

And there are plenty of ways to get into trouble: If you don’t slip and fall on the steep ice chute, you could gash a leg on your own sharp crampons or be hit by sharp shards of falling ice, loosened by your colleagues climbing above you.

The cave is mostly silent; there’s not much there to make noise. But what little sound there is – from dripping water, falling bits of ice and the crew members themselves – gets magnified and bounced around the underground echo chamber. This is where the “Booming Ice Chasm” gets its name.

Someone shouting at another crew member across a passageway sets off a series of echoes that makes the sentence unintelligible.

So cavers murmur into radios, or adopt a halting speech pattern that dispenses with any unnecessary words: “I. GO. LEFT. NOW.”

Taking a dip in an underground lake

It’s cold in the cave – just below freezing. Cool air sinks to the bottom and gets trapped there, making it an icebox year-round. All the cavers wear thick jackets and many layers of clothing as they go about their work.

So when Vieira strips down to his underwear to go for a swim in a mysterious lake at the bottom, it isn’t without some serious misgivings.

But he’s here to map the cave and seek out any hidden passages. If those passages happen to be under an icy lake some 150 metres into a mountain, so be it.

“This is going to suck in a wetsuit. This is horrendous.”

“Just because you end up with a pool of water in a cave doesn’t mean that the cave ends,” Vieira says.

This, scuba divers will know, is where a drysuit would have come in handy. Vieira didn’t bring one (it was too heavy to haul up the mountain).

“This is going to suck in a wetsuit. This is horrendous,” he says.

Feeling around for hidden passageways in an icy lake is one thing.

More treacherous is the layer of ice Vieira finds himself walking on. He stomps on it to break through and, underneath, he finds more water, then another layer of ice – layered like a cake going who-knows-how-far down.

“That is dangerous,” Vieira says. “That is very dangerous.”

Too dangerous for diving. One heavy misstep and he’d plunge straight through the ice. And as he wades through icy layers that pile on the surface of the water, he creates an uneven crust of bobbing slabs of ice that could trap him under water if he dunks, then gets disoriented.

“I won’t be diving that,” he says. “Not without big, thick lines, a diving suit, and bigger cylinders just to give me more time.”

He does dunk, trying (unsuccessfully) to find the lake’s bottom, before making his way back to shore.

“Invigorating. I’m awake for sure.”

But he leaves chilly and unenlightened, the pool not fully explored. He doesn’t even know how deep the water goes.

“No bottom, no passageway. Just another sheet of ice underwater.”

So he’ll have to return.

It’s a 22-metre climb over rounded humps of ice to reach the top of a frozen waterfall in Booming Ice Chasm’s main chamber. That’s no mean feat. And Vieira’s ice climbing is rusty (he spent much of the season caving in New Mexico, he explains).

But that frozen water must come from somewhere. To map the cave properly, he needs to find out.

Like all the cavers, Vieira has crampons – big, sharp spikes strapped to his feet to help him gain traction on the ice. Step by crunchy step, he embeds his pick far enough into the ice to let him pull himself up as he anchors his crampons into the wall. With each whack of the ice pick, he’s mindful that the shards he sends down could slice any hapless crew members below.

Vieira is clipping himself in to bolts he screws into the ice as he goes. If he slips, he falls until his rope catches him at the last spot he clipped in.

But it’s worth it: At the top, Vieira discovers more passageways, one of which curves back towards the main chamber, ending in a glittering ice waterfall reaching to the ground below. And he finds a brand new chamber he’d never seen before, branching off in several directions. Some end in tiny passageways too tight to squeeze through. One passage looks like it might keep going, but he leaves it unexplored for now.

Vieira and the other cavers measure the passages by marking a point on the wall of the new room with nail polish, then shining a laser beam from that point down the shaft to get a reading on the distance and angle. They log the information in a small notebook. 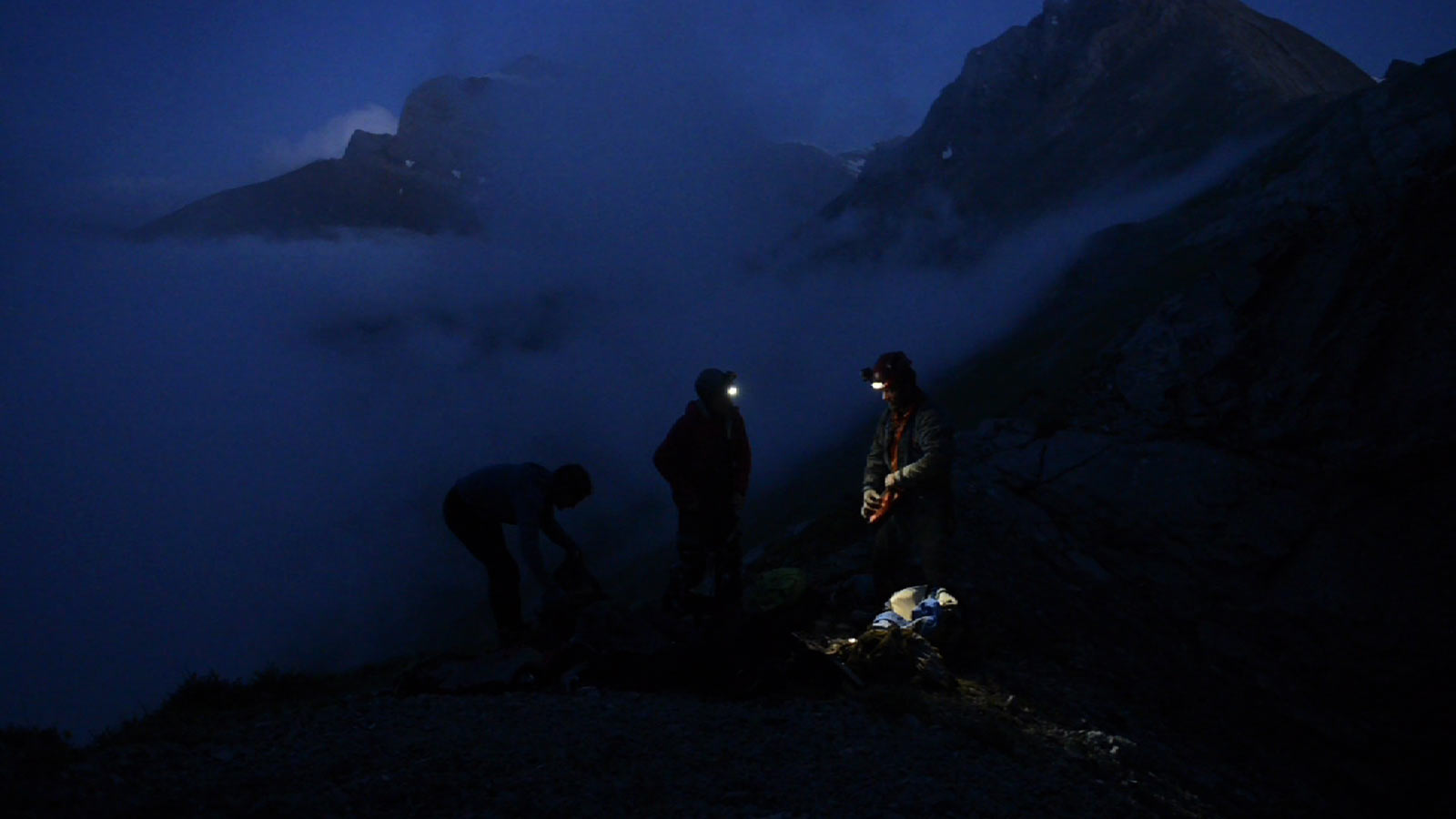 Cavers reconvene at the mouth of the cave, emerging close to midnight after about 13 hours underground.
It’s almost midnight when the cavers finally emerge from Booming Ice Chasm. But their day isn’t done: It’s still a three-hour hike down the mountain.

The crew is greeted with cold pizza below, as they prepare to make the trek all over again one last time.