To many, caves and their underground secrets constitute Earth’s final frontier. For Nick Vieira, they’re a playground and a calling. Even among the most experienced cavers, Vieira is as hard-core as they come. He sleeps in his jeep, lives off four litres of chocolate milk a day (plus expired army rations) and explores caves more than 200 days of the year.

In this 16×9 exclusive, Vieira leads a team inside one of the most unique caves in the country: Booming Ice Chasm. There, in the depths of an icy abyss, the team pushes the limits to explore and map new passageways – while risking hypothermia and serious injury.

But it’s not just cavers who are fascinated by this underworld. Ann Cheeptham, a microbiologist at Thompson Rivers University in Kamloops BC, is also looking to caves for answers. Her goal? To create new antibiotics from the bacteria in the caves’ soil. Early results from the samples Nick has given her are nothing short of extraordinary. 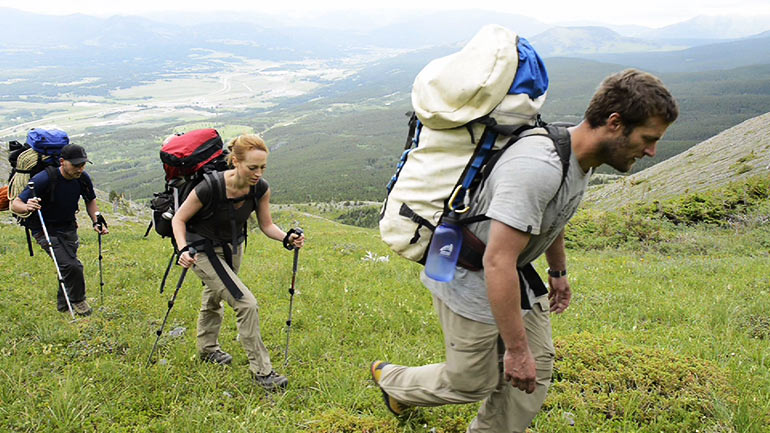 The day starts early: it’s up at dawn for the team of mountaineers, cavers, camera crew – and one reporter.

The destination? Booming Ice Chasm, a cave about 700 vertical metres up the side of a mountain in the Alberta Rockies.

This is the first of a three-day adventure, during which the cavers will survey the cave and map its layout, as well as collect bacterial specimens for research.

Tucked behind a rocky ledge, the cave’s mouth is almost impossible to find unless you know what you’re looking for. Nick Vieira has been here before, after his friend Chas Yonge first spotted the chasm as a mysterious dark spot on Google Earth. He’s back to get to know it a little better.

Easier said than done. The grueling hike is three hours of scrabbling up scree and inching along the sides of cliffs. There is no trail. And it’s steep: virtually vertical.

Then factor in the packs on your back: The crew is carrying close to 30 kilograms of gear apiece, with everything from ropes, ice picks and caribiners to lights, batteries and layers of clothing. Vieira is carrying even more.

As the team approaches the cave entrance, it becomes a rock-climbing exercise, clinging to a rope while crawling along a cliff face.

Vieira knows it’s nuts. But “I love it. I thrive on it. I get very excited – I’ll get giddy and be like a school kid again.”

To him, climbing and caving are all about managing the risks and knowing his limits. And keeping calm.

The entrance to Booming Ice Chasm is a gaping maw in the side of the mountain, several metres across. It slopes downward, lined with loose stones and snow that gives way to a sheer ice slope, dropping some 200 metres.

That ice sheet is a treacherous luge for anything knocked loose, be it rock or battery pack – anything dropped shoots down the steep slope to the bottom of the cave, at a velocity that could injure or even kill someone below.

The cave has changed since the last time the crew visited. Last season, says lead videographer Francois-Xavier de Ruydts, “there was twice as much snow and that made it a lot safer.”

It starts to rain as the team reaches the cave’s mouth. This presents some problems. Vieira and reporter Carolyn Jarvis make their way off the ledge and into a rocky enclave partway into the cave.

It’s cold here too. But at least it’s mostly dry.

Once they’ve set up rope lines inside the cave, the cavers return back down the mountain.