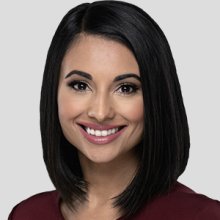 Sonia Sunger is the co-anchor of Global News Morning & Global News at Noon and has 15 years of experience as a broadcast journalist. Sonia joined Global BC in 2013 and was part of the diligent team that brought BC1 — the province’s first 24-hour news channel — to the airwaves.

Sonia is passionate about breaking news and is driven by journalism’s duty to inform and hold decision-makers to account.  Sonia’s favourite part of her job is the numerous live interviews she gets to conduct every day and getting the opportunity to ask the questions British Columbians want to be answered.  In 2017 Sonia spearheaded the successful charity event ‘Haircuts for a Cause’ where she was joined by dozens of viewers who cut and donated their hair on live television.  Over the course of the event’s four-year history, hundreds of ponytails have been donated to both the Canadian Cancer Society and Wigs for Kids BC.

Sonia studied journalism at Concordia University in Montreal before graduating with honours from the Radio and Television Arts program at the Northern Alberta Institute of Technology. Her career in journalism formally began in 2006 at CTV Edmonton where she filled just about every role in the newsroom – from writer, web journalist, producer and anchor – before making her move back to B.C. in 2013.

Sonia was born and raised in Victoria, B.C., and is a west-coast girl at heart. Sonia has family roots in the Fraser Valley and spent many summers at her grandmother’s berry farms in Abbotsford. In May of 2020, Sonia and her husband Chris welcomed their son Hugo into the world.  She is happy to share that her family is expanding with baby two; her daughter Sohana arrived in September 2021. Sonia says starting a family with the love of her life has been her greatest joy.

Sonia is a proud second-generation Canadian and speaks Punjabi. In her spare time, you’ll find Sonia spending time with her family, getting fresh air on the seawall or trying out a new recipe.  Sonia is passionate about healthy eating, meditation, and building an active lifestyle with her family.

You can follow Sonia’s on social media @soniasunger on Instagram and Twitter and for a deeper look at her life as a mother you can visit her blog at soniasunger.com