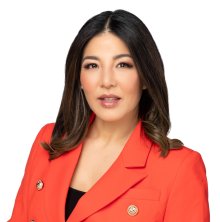 As an award-winning journalist, Minna Rhee has been a permanent fixture on Canadian television screens for over a decade. Rhee’s witty and energetic personality paired with her vast television experience makes her a mainstay on Global News Toronto.

Rhee has covered everything from child poverty in Toronto to the city’s newest Mayor, John Tory. She also reported on the story of Phil Cooper, a man who visited his wife every day at her nursing home until she was moved hours away from him, without consent, after a fire that displaced over 190 people. Through her reports, Phil was able to find a place to stay closer to his wife and get the answers he needed.

Rhee has also worked as a correspondent for 16×9, filing long format stories for the investigative newsmagazine program. In addition to her reporting role, Rhee regularly fills in as co-host on The Morning Show and News at Noon.

From George Clooney, to Bill Clinton, to Oprah Winfrey, Rhee has interviewed many celebrities, but it’s the people she meets in the community while covering local stories who leave the biggest impression.

Born in Toronto, Ontario, Minna graduated on the Dean’s list from the University of Toronto with a degree in Asia Pacific Studies and Sociology. She spent three years working in the technology industry before pursuing her journalism career.

During her downtime, Rhee can be found in her kitchen testing out new recipes, discovering the outdoors with her two daughters, or looking for a hidden gem to add to her costume jewellery collection.