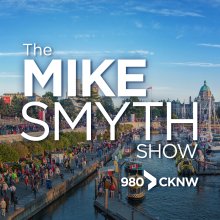 Currently the host of The Mike Smyth Show, Mike has been a fixture on the ‘NW airwaves for more than 20 years.

Mike came to radio while pursuing a long career in print media. He worked at daily newspapers in Ontario before becoming a legislature correspondent at The Canadian Press, Canada’s national news agency, a role he held for eight years. In 1996 Mike became a political columnist for the Vancouver Province where his column ran for 24 years.

Mike began as a regular commentator on 980 CKNW providing political analysis to The Rafe Mair Show for over a decade. In addition, he hosted weekends and overnights before landing his own show, Nightline BC, the top night-time talk show from 2004 to 2007. Mike also hosted The Mike Smyth Show in 2010 and 2011, stepping in after regular host Christy Clark returned to politics.

Mike is married to Mary Griffin, a reporter at CHEK TV in Victoria. They have two teenage sons, Declan and Seamus, and a dog named Scout.

The Mike Smyth Show airs Monday to Friday from 9 a.m. to noon.