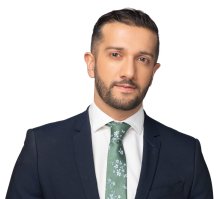 Kamil Karamali is a multi-platform storyteller for television, radio and web — and has thrived in many reporting roles in cities across Canada throughout his career. He is now excited to put those skills to use as a Digital Broadcast Journalist for Global News BC.

Kamil is a graduate of the broadcast journalism program at BCIT and started his career off as a traffic and news reporter for Corus’ Vancouver radio stations (CKNW and AM730). He moved east to report for the CBC in Ottawa in 2013, working as a video-journalist, radio reporter and web writer.

He then moved back home to B.C. and reported for CBC Vancouver on local and national platforms in 2015. Kamil was awarded the RTDNA Canada’s Byron MacGregor Award for best radio newscast in a large market twice in back-to-back years. The first award was for national breaking news coverage of a 4.8-magnitude earthquake off the coast of Vancouver Island in 2016. The second was for the federal approval of the Kinder Morgan pipeline expansion and the protests that followed in 2017.

Kamil most recently worked as a reporter and anchor for CTV Calgary.

He has also held multiple roles as a freelance videographer and editor. Kamil’s highlight to-date has been working for Aga Khan Development Network in Pakistan, Mozambique and Tanzania shooting and editing videos on some of the not-for-profit’s charity work in rural regions.

Kamil was born in Karachi, Pakistan and has traveled across the world. During his excursions, he can be seen surfing, scuba-diving, snowboarding or climbing mountains whenever he can. He recently summited Mount Kilimanjaro in Tanzania.