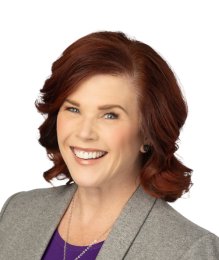 J’lyn Nye is an award-winning journalist who has worked in television in cities across Western Canada for more than two decades.

In 2008, J’lyn moved from in front of the camera to behind the microphone. After a few years working in music radio, she went back to her first love: news. She currently hosts 630 CHED Afternoons with J’lyn Nye.

J’lyn is a strong supporter of the Canadian military and the Honorary Colonel of 408 Tactical Helicopter Squadron with the Royal Canadian Air Force. She has also served as patron of the Edmonton Garrison Military Family Resource Centre for many years.

J’lyn has been named one of Edmonton’s Top 40 under 40 and twice nominated as a Woman of Distinction in the city. She volunteers many hours to groups working to end domestic violence in Edmonton, as well as the Angels Anonymous Connection, which grants wishes to terminally ill adults.

In her spare time she loves to read, ride her motorcycle, hang out with her dogs and enjoy the patio with her husband.

She also likes cheese. And wine. Cheese and wine together.