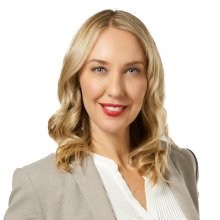 Jayme Doll is an award-winning journalist and has been a proud member of the Global News team for more than a decade.

Doll grew up in Peace River, Alberta where she hit the airwaves for the first time at the age of 14 hosting a teen radio program on the local AM station.

She later studied communications at the University of Calgary and broadcast journalism at the Southern Alberta Institute of Technology (SAIT).

Doll began her journalism career working at News Talk radio in Regina where she covered the crime beat. She then went to CTV to anchor the 11 p.m. news. With a desire to always live near the sea, Doll moved to Halifax to work for CBC television, but the prairies came calling once again, and she packed up her belongings and headed to Winnipeg to begin her career with Global News.

Doll also spent a month reporting on sexual violence in the Democratic Republic of Congo. Touched by her experience, she felt the need to spend more time in Africa. She accepted a position with Journalists for Human Rights working in Kumasi, Ghana and spent seven months working with local journalists covering human rights issues and filing stories for Global News back home in Canada.

After six years crisscrossing between Canada and Africa, she could no longer deny the call of the Rockies. In 2007, Doll came back home to Alberta to join Global Calgary as Anchor/Reporter.

She returned to Africa in 2013 and spent a month training local journalists in Sierra Leone while covering stories for Global News. The series became known as The Africa Project, and won the RTDNA Adrienne Clarkson Award for Diversity in 2014. She has also received a number of awards for her work in categories spanning from special feature reporting to breaking news.

She was one of the first Canadian journalists in Red Lake, Minnesota during the school shooting that left nine students dead, played a crucial role in Global Calgary’s flood coverage as the lone television reporter to cover the devastation in Canmore and Exshaw, and was on the ground covering the worst mass murder in Calgary’s history.

She lives in Banff where she takes refuge in mountain living with her husband and daughter.