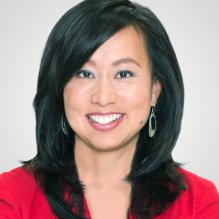 Elaine has been part of the Global BC news team since 2006. Originally from Biggar, Saskatchewan, she spent most of her childhood growing up in Regina and is proud to be a prairie girl at heart.

Elaine graduated from the Journalism program at Ryerson Polytechnic Institute in 1995. She began her broadcast journalism career in Ottawa working for the Parliament Hill bureau of WIC/CHUM stations as an editorial assistant and reporter. She then joined CBC Regina as a reporter and fill-in anchor.

She moved to British Columbia and worked at UTV, which became a Global TV/CKVU station. There, she took on several duties including reporting, writing and associate producing. Elaine then went over to Calgary’s A-Channel to be their weekend anchor before returning to CKVU as a consumer reporter. She eventually became the 11pm and weekend anchor there. But in 2006, finally found her home at Global BC.
As an award-winning journalist, Elaine believes every person has a story to share.
Elaine is especially passionate about sharing stories involving BC’s sick children and their families. As mother to Addison, the first infant to receive a heart transplant at BC Children’s Hospital in 2011, she knows first-hand the unique issues these families face. Elaine and her husband, reporter Aaron McArthur, are dedicated supporters of the BCCH and organ donation, volunteering their time for numerous charity functions.
In her spare time, Elaine enjoys traveling around the world and has now hit all seven continents. So far, Addison is turning out to be a globe trekker like her parents with passport stamps from Italy, Australia, Hong Kong and Thailand.