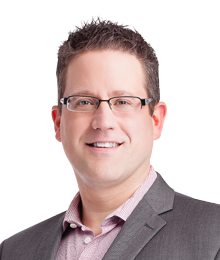 Derek joined Global Winnipeg in 2007, where he spent five years anchoring North America’s #1 soccer show, the Fox Soccer Report, airing on Fox Sportsworld Canada and produced at Global Winnipeg. “Highlights from my time on the Fox Soccer Report include covering the MLS Cup in 2007 and 2010 and flying to Los Angeles to play a video game against American soccer superstar Landon Donovan.”

Derek grew up in Okotoks, Alta., (just south of Calgary) and studied journalism at Ryerson University in Toronto. “I loved sports and television as a kid. I learned at age six that I wouldn’t be a pro athlete, so tried to find something else.” He knew in high school that television was where he wanted to be. He loved sports and thought television was a way to show people they should love sports too. Derek’s first on-air job was doing weather, traffic and snow reports on 106.5 Mountain FM in Canmore, Alta. His first TV job was as a news reporter in Kamloops, B.C. “Highlights from there include sitting in a car with a parka on in 36-degree heat to show why you shouldn’t leave your dog in the car.” Derek came to Winnipeg in December 2001 and worked as a news reporter. “My fondest memory of news reporting is a story about a boy being hit in the face and knocked off his skateboard by a goose. We did the story in the vein of America’s Most Wanted, and that the geese were trying to take over the city.”

Derek’s years of broadcasting experience, great sense of humour and love for his chosen career make him a great fit for Morning News. “We can teach you things and learn things from you as well. I hope we give you a new way to look at issues about our city and country. Most of all I want to send you out the door feeling better about yourself and the city you live in.”