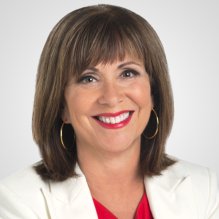 Deborra has anchored the Early News at 5 pm and News Hour “Insight” since September, 2001. During her long career at Global and BCTV, she’s been a reporter, a producer and an anchor. Her first love on the job is still telling a good story.

Deb was born in Trail, B.C., a small town with a big heart in the West Kootenays. She managed to grow up there without doing herself or her parents too much damage.

She left when she was 18 to attend UBC and got her first taste of journalism there by reading newscasts on the campus radio station, CITR and reporting for the Ubyssey. And even she can’t believe now that she also did a talk show on CITR — IN FRENCH — with a woman from Quebec! (Don’t ask her to speak that fluently now, however).

She graduated with a Bachelor of Arts degree, majoring in French. Then moved on to Carleton University in Ottawa where she received an Honours Bachelor degree in journalism and immediately began working for Canadian Press as a junior reporter.

She longed to return to B.C. Once back, she joined the now defunct United Press Canada (Canadian arm of UPI). After three years, she moved to Global BC.

Off the job, she’s a jogger, a former soccer player (she and her team once competed in the Provincial Games), a skier, a swimmer (occasionally), and an avid reader (when she gets a moment). She also loves to watch her daughters swim, read and play soccer. Her husband Roger is a skilled Global BC news cameraman.

Aside from an active family life, she donates many hours to charity work, including projects for the Courage To Come Back Awards, Make-A-Wish Foundation of B.C., the United Way, Canuck Place, the Down Syndrome Research Foundation and Variety Club.

The Liberals confirmed they had asked for a recount in the riding, where a “potential anomaly” with a ballot box wa… twitter.com/i/web/status/1…

“We want something better for future generations and better treatment for First Nations in public services, but als… twitter.com/i/web/status/1…