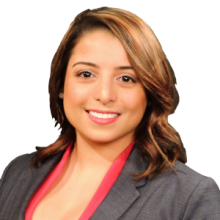 Daniella Ponticelli is the community reporter for Global News in Regina.

Since joining the team in October 2019, Daniella is focused on storytelling through a hyperlocal lens, spotlighting events, organizations and individuals mostly in southern Saskatchewan. She’s also a fill-in weather specialist and live reporter for Global Morning Live.

Daniella is a passionate sports fan, joining Rider Nation when she first moved to the province in 2012. She’s also the sideline reporter for the Saskatchewan Rush Lacrosse Club this 2019-20 season and an international roller derby broadcaster.

04:14
Global News at 10 Regina
Doctor shares experience of being first to be vaccinated in Saskatchewan

Joely BigEagle-Kequahtooway is an interdisciplinary artist and the co-founder of Buffalo People Arts Institute in Regina.

Sign language interpreter Karen Nurkowski reflects on working more than 100 COVID-19 press conferences, and the future of inclusion in Saskatchewan.

Christian Mbanza and Vibya Natana are members of Black in Saskatchewan, a community organization dedicated to educating people about anti-Black discrimination and systemic racism.

Saskatchewan is among the minority of provinces clawing back the full CERB amount from anyone receiving provincial income support.

Mohan Babu, a biochemist at the University of Regina, received funding for ongoing research related to COVID-19.

New or improved: What Regina’s mayoral candidates are promising for recreation facilities

From pools to community centres, candidates have set their sights on projects they say will fuel Regina’s economic recovery during the COVID-19 pandemic.

Amid COVID-19, this year’s virtual Dinovember activities includes using an app that allows kids to interact with a 3D animated dinosaur on screen.

‘A relief:’ Some Sask. businesses embracing indoor mask mandate, others say it will impact sales

Starting Nov. 6, mask use will be mandatory at most indoor public spaces in Saskatoon, Regina and Prince Albert for 28 days.

Max Eisen, 91, survived Auschwitz and has travelled the world sharing his story. On Tuesday, he spoke virtually to some 3,000 students in and around Regina.

The only Remembrance Day service in Regina on Nov. 11 will take place at the cenotaph in Victoria Park, which citizens are encouraged to view online from home.

Elections Regina is offering several ways to vote, including accommodations for people who have had to self-isolate, in an effort to bolster municipal voter turnout.

City of Regina steps up mandatory mask enforcement on buses

Regina Transit riders can soon expect increased enforcement of mandatory mask use, according to the city.

Students in grades 4-12 have been getting a COVID-friendly civic education ahead of the Saskatchewan provincial election on Oct. 26.

Cuts or savings? Regina mayoral candidates square off on details of campaign promise

Another person in B.C. has been diagnosed with a rare blood clot disorder following a dose of the AstraZeneca vacci… twitter.com/i/web/status/1…

"One dose is definitely going to really help us return to normal," one expert said. trib.al/GKX3RmN

She felt drops on her face and entered a waking nightmare. trib.al/SIjTfc6