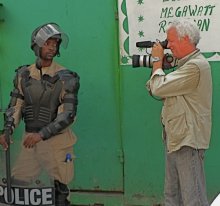 Claude, a story producer, began his television career at Global. In the 1980s, he worked here as a writer and reporter. He returned in the 90’s as a freelance special correspondent, reporting from many of the world’s trouble spots for the National News with Peter Trueman. Before that he covered the fall of Communism as chief European correspondent for CBC’s “The National”. He taught broadcast journalism at UBC, co-authored a bestselling book (The Canadian Caper–the story that “Argo” didn’t tell), and wrote a weekly column for the South China Morning Post.

Man who abducted his 4 kids, brought them to Iran, says he was escaping ‘Canadian nightmare’

Saren Azer’s story is one that has blazed through social media in Canada for 9 months. Now, in an exclusive interview with Global News, he says he and his kids were escaping a “nightmare.”

Fatigue on the rails: a trainman’s nightmare

Unpredictable schedules are the bane of the rail industry, say the men and the women who drive the trains. And those schedules can play havoc with their sleep cycles.

Victims of a deadly mill explosion hold the government to account.

History will note that Afghanistan was the longest, and one of the most expensive, wars in modern history.

16×9 producer Claude Adams spent over a week in Afghanistan filming our feature “Losing Afghanistan”. Here, he documents some of his experiences in Kabul.

Leaving war behind: The odyssey of Sayid and Amira

So far this year, more than 500,000 men, women and children have made the trek along the so-called Balkan Route on their way to what they hope is a new life, and safe haven, in Northern Europe.

Animating a troubled life… and death

16×9 used animation to portray the troubled life and death of Paige Gauchier.

Paige’s story: In search of a name

When the report entitled “Paige’s Story” came out last May, it galvanized a province—a story so profoundly depressing you can’t read it without flinching.

UPDATE: A fugitive for 10 years, wife of slain Canadian millionaire to face trial

Aurea Vazquez Rios, charged in the murder of Adam Anhang, a millionaire Canadian entrepreneur, has been returned to her native Puerto Rico to face trial.

UPDATE: A victory against suicide profiling

A Toronto woman who was denied access to the United States when border agents learned of a suicide attempt in her past, is pleased that this may no longer happen to Canadian travelers in the future.

Claims of cruel and unusual detention

The International Human Rights Program at the University of Toronto, released a recent report saying detainees held for immigration reasons are treated as “something less than human” in provincial jails.

People in Toronto with mental health issues who have non-criminal encounters with police, such as attempted suicide, will not have that information released to anyone asking for background checks, effective this week.

A world of echoes: Canadian research into how the blind use sound to see

Daniel Kish is a walking phenomenon, a blind man who uses echolocation for sight.The practice has become the subject of ground-breaking research at an Ontario university — and has caught the attention of scientists around the world.

The endless pain of unexplained loss: MH370 one year later

The aviation mystery of the ages is about to enter its second year. The search for Malaysia Airlines Flight MH370 never really stopped. And there’s no end in sight.

Not wanted in Canada: How the CBSA deals with some ‘inadmissibles’

Michael, an African man in his mid-50s, is one of hundreds being detained in a cell. He has been locked up for 8 ½ years, in conditions he calls “horrible.”

Less than half of Canadians feel the holidays will feel normal this year. trib.al/dcRlUIp

“Guys like Smiley, they provided us a safe haven and directed us where to go, like for myself, to bring all my guys… twitter.com/i/web/status/1…

“I’m worried that as the numbers go up, the public health care facilities will become overwhelmed," one health prof… twitter.com/i/web/status/1…