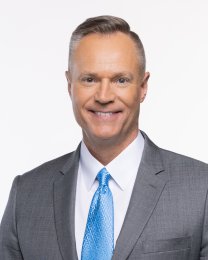 Chris returned to Canada and the Global News family in 2006. Prior to that, he was host and anchor of the morning program Good Day New York at WNYW, the Fox news affiliate in New York and at the time, the most-watched, locally-produced morning show in the northeastern U.S.

Chris has nearly 30 years of experience in broadcast journalism and is a proud graduate of the Broadcast Journalism Program at Mount Royal University in Calgary where he made the Dean’s List for Academic Excellence and received the Jimmy Condon Scholarship to play basketball. After graduating in 1989, he worked in Lethbridge, Alberta as a reporter covering municipal and agricultural issues before moving up to news anchor and eventually winning a CanPro Award as anchor of the Best Small Market Newscast. He returned to Calgary in 1992 as reporter and anchor of CFCN’s weekend newscast before moving to Calgary 7 (now known as Global News Calgary) as one of its main evening news anchors.

In 2000, Chris moved to the U.S. to be the anchor of the morning newscast at the ABC affiliate in Dallas, Texas. He covered major stories such as the crash of the space shuttle Columbia and the subsequent investigation, the impact of the September 11th attacks on Dallas, and the deployment of U.S. troops from Fort Hood at the outbreak of the war in Iraq. He was nominated for a Katy Award, the highest honour in Texas journalism.

In 2003, he moved on to anchor Good Day New York at WNYW where he received a career highlight, winning a New York Regional Emmy Award for “Best Morning Newscast” in 2005.

Outside of the newsroom, Chris actively supports the B.C. Children’s Hospital, Canuck Place Children’s Hospice, and organizations that support research and treatment of diabetes and arthritis. Chris is also proud to serve on the board of the CKNW Kids’ Fund. Chris and his wife, Jane, also support the adoption of animals and have provided a home to many dogs and cats, including their current pet, Susie, a West Highland Terrier.

Chris loves all sports, including rugby, football, basketball, golf, mountain biking, and in the winter, snowboarding. He and his family also enjoy travelling whenever they find the time, and consider London, New York and Mexico as their favourite destinations.

Chris and Jane live in Vancouver with their son, William.