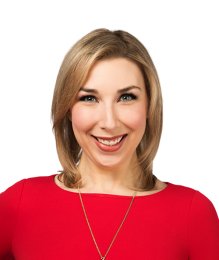 Breanna Karstens-Smith anchors Global News Hour at 6 and Global News at 11 on weekends, and reported on various topics during the week.

Born and raised in Edmonton, Breanna was excited to join Edmonton’s #1 news team in June 2019 after spending time working throughout Alberta and British Columbia.

Breanna earned her Broadcasting diploma from Mount Royal University in Calgary. After graduation, she made the move to CHAT Television in Medicine Hat to gain experience.

In 2012, she returned home to work as a reporter in Edmonton. After four years, she made the move to Vancouver where she reported and filled in on the anchor desk.

In May 2016, Breanna was one of the reporters in Fort McMurray when a wildfire quickly spread to the city, forcing everyone to evacuate. She spent the next year travelling back and forth to Fort McMurray to tell stories of the damage and rebuild. As a result, she was part of the team awarded the 2017 Edward R. Murrow Award for Continuing Coverage.

The following year, Breanna was once again on the front lines as British Columbia experienced a record wildfire season. The coverage earned the 2018 Charlie Edwards Award for Breaking News and the 2018 Bert Cannings Award for TV Newscast.

Giving back to the community is extremely important to Breanna, having done work with Kin Canada, the MS Society of Canada and Boys and Girls Clubs Big Brothers Big Sisters.

In her spare time, she is busy planning her upcoming wedding, travelling, spending time with her family and running with November Project Canada.