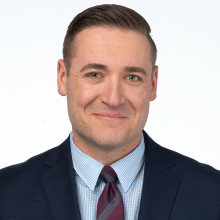 Adam MacVicar joined the Global News team in May 2017.

Adam was born in the small town of Wabush, N.L., where he spent the first 12 years of his life before moving to Calgary.

He soon developed a passion for news, storytelling and politics.  After graduating high school, Adam attended the Radio, Television and Broadcast News program at the Southern Alberta Institute of Technology.

Upon graduating, Adam began his career working as an anchor and reporter at a radio station in Leduc, Alta. He made his transition into TV news when he accepted a job at Lloydminster’s Newcap Television; there, he anchored and reported, also becoming their city hall reporter.

When Adam isn’t reporting news he can be found watching and reading it. He enjoys living an active lifestyle, watching the latest boxing or mixed martial arts card, and spending time with friends and family.

He’s also diehard Calgary Flames and Stampeders fan, to which he receives plenty of grief on a daily basis.