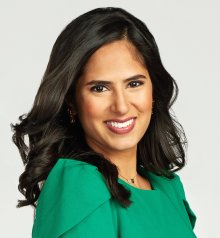 Aalia Adam is an award-winning journalist who is currently a multi-market anchor for Global News in Montreal, Halifax and New Brunswick.

Born and raised in Montreal, she first discovered her passion for storytelling at 16 years old when she travelled to southern Africa and was inspired to create a documentary on HIV-AIDS.

By 17, she was already interning at Global Montreal and got hired as a reporter just shy of completing her journalism degree at Concordia University in 2012.

During her time there, she covered major news stories, such as the Lac-Megantic train derailment, federal and provincial elections and Nelson Mandela’s funeral in South Africa.

Looking to diversify her experience, she briefly departed from her Global News family. She spent a year reporting on live breaking news for Breakfast Television Montreal and then went on to work as a reporter for CTV Montreal.

After moving to Toronto, she reunited with Global News as an online video journalist and the host and anchor of Global News Weekend.