The unemployment rate was 8.6 per cent for the month, up 0.1 percentage points from 8.5 per cent in November. 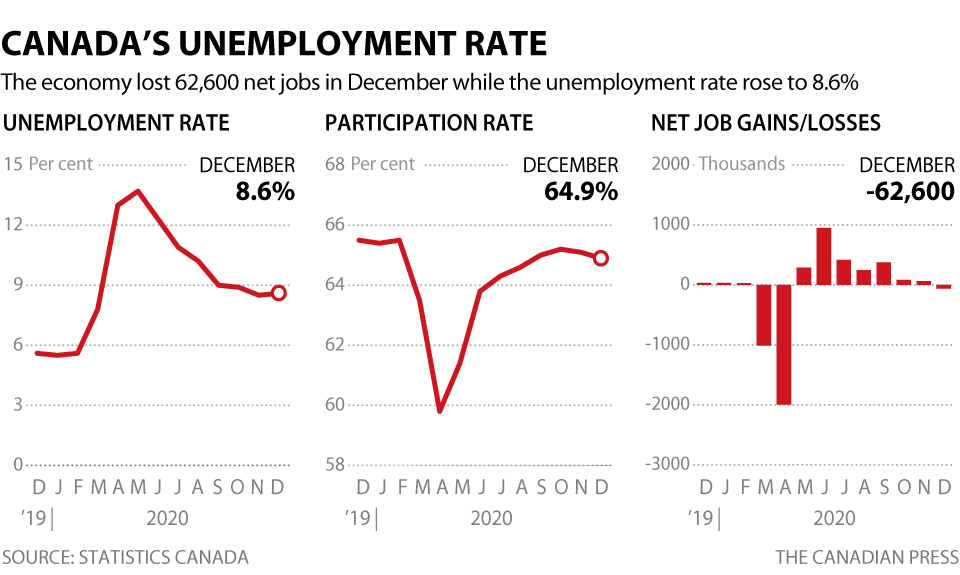 The result ended a streak of monthly job gains that began in May as restrictions put in place to slow the spread of the pandemic began to ease.

Statistics Canada also noted that total hours worked fell for the first time since April as they declined 0.3 per cent in December.

The accommodation and food services industry lost 56,700 jobs for the month, while the “other services” category, which includes hair salons, laundry services and other areas affected by public health measures, lost 30,800. The information, culture and recreation group lost 18,800.

The number of jobs in the services-producing side of the economy fell for the first time since April as it lost a total of 74,000 in December. The goods-producing sector gained 11,300 jobs.

Statistics Canada said its report was a snapshot of the labour market conditions as of the week of Dec. 6 to 12.

It noted that additional public health measures were put in place in many provinces after that period and would likely to be reflected in its January labour force survey results.

Financial data firm Refinitiv says economists on average had expected the report to show a loss of 27,500 jobs for December. The unemployment rate was expected to be 8.6 per cent.