Supporters of U.S. President Donald Trump gathered en masse and stormed the Capitol building on Wednesday, breaching police barricades and forcing the building into a lockdown.

Supporters of the Republican president entered the building, breaching the Senate and the private offices of elected officials.

Here’s a look at what happened inside the building.

As protesters stormed the entrances, the building went into lockdown, forcing politicians, their staffers and members of the media to shelter in place.

Others were evacuated from their offices and from the chambers to undisclosed locations as police worked to secure the building.

Philly Inquirer reporter Jonathan Tamari, who was inside the House Chamber, said protesters were smashing the doors of the room in an attempt to get inside.

They are smashing the doors to the house chamber

“My hands are starting to shake,” Politico reporter Olivia Beavers wrote from inside the chamber.

“I can’t fully relay right (now) how fear is coursing through the house right now as the sound of gas masks are being unwrapped.”

My hands are starting to shake. I can't fully relay right ow how fear is coursing through the House right now as the sound of gas masks are being unwrapped.

Photos from inside the room show people sheltering in place, hiding underneath the seats and in the aisles of the gallery.

Furniture was pushed against the door to try to secure the chamber as members of the mob banged on the doors.

Photos of the scene show security with guns drawn, pointing at the door to the chamber after a glass panel was smashed.

Maryland Rep. David Trone shared photos of himself donning a provided gas mask on Twitter, confirming he was safe.

“We have been evacuated,” he said. “Let me be clear: we will not be stopped by this lawless intimidation.”

I am safe. We have been evacuated.

Let me be clear: we will not be stopped by this lawless intimidation. pic.twitter.com/WWDJst4V1B

“After 5 hours I’ve been rescued from my hiding place,” she wrote. “Now I can show you my DIY barricade and gas masks.”

After 5 hours I’ve been rescued from my hiding place. Now i can show you my DIY barricade and gas masks. Protestors were right outside the door chanting ‘USA USA’ it was scary but i am ok! Thanks all for your prayers. pic.twitter.com/OX3rfM35zH

Meng said she could hear protesters outside the door chanting “USA.”

Meanwhile in the Senate, protesters were able to get into the gallery and on the chamber’s floor.

Trump supporters also breached the offices of elected members of Congress, sitting behind desks and touching their belongings.

Photographers inside the Capitol building caught the break-ins on camera. 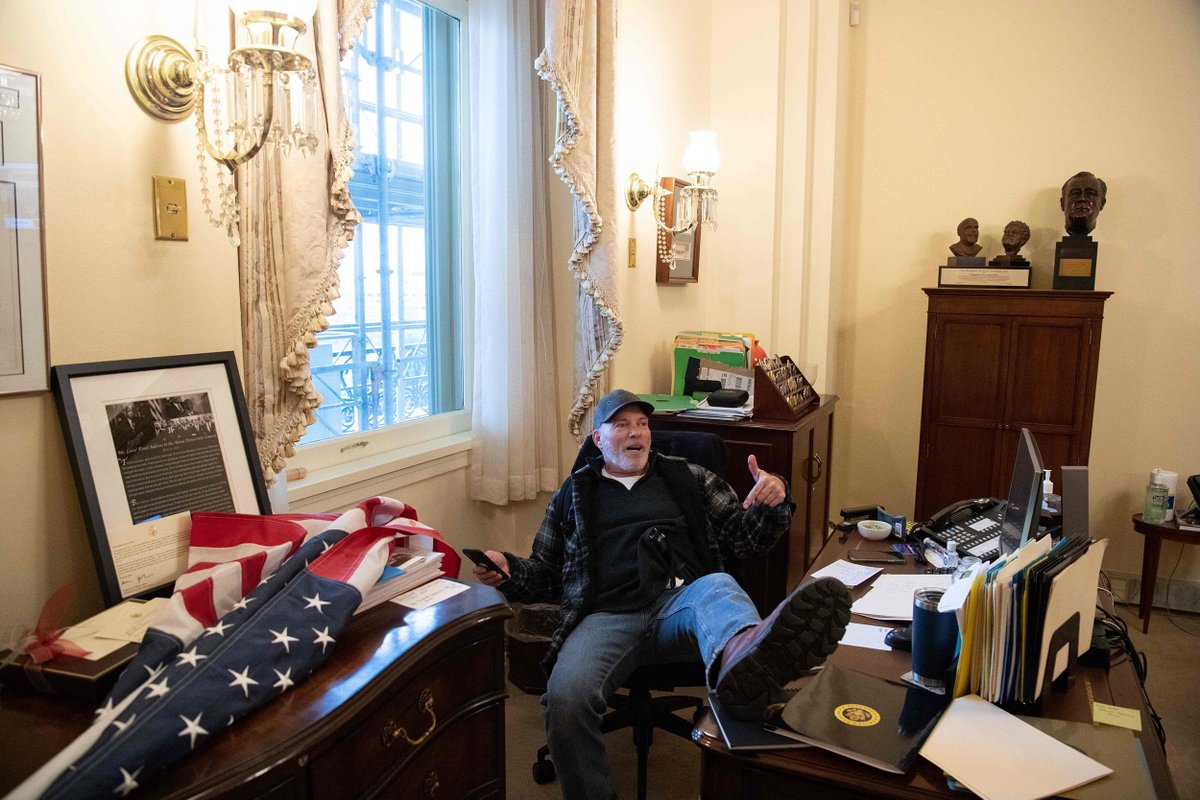 Meanwhile, outside, police remained drastically outnumbered by the protesters, and struggled to keep the protesters off of the steps and balconies of the buildings. 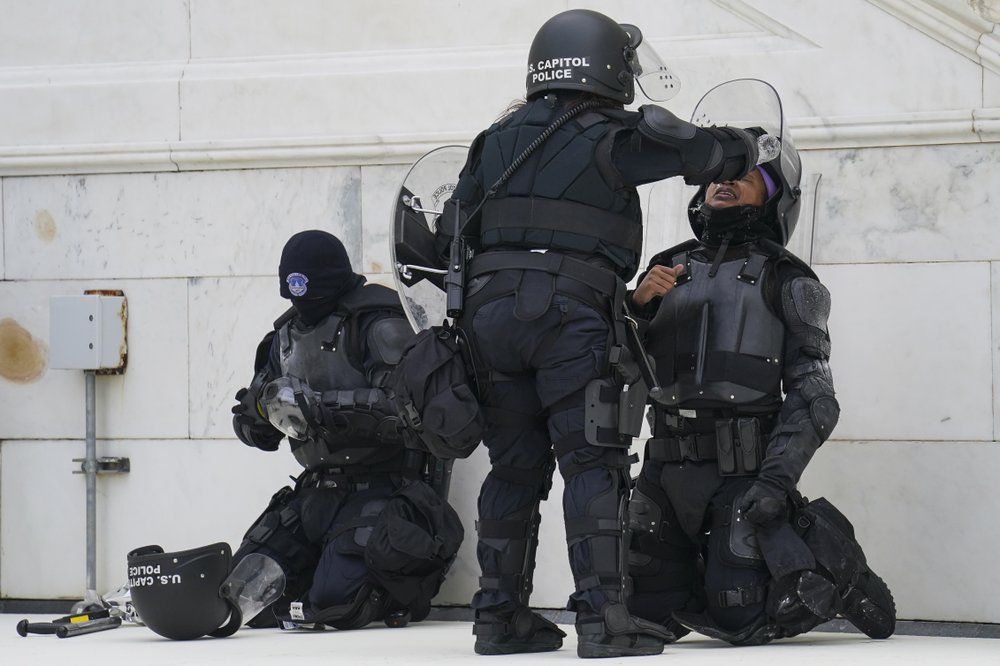 In a tweet, Press Secretary Kayleigh McEnany confirmed the National Guard was “on the way” to assist.

Just before 5 p.m. ET, riot police arrived at the U.S. Capitol complex, and slowly pushing protesters away from the building.

Heavy vehicles were also being brought in to fortify the grounds.

Heavy vehicles being brought in to fortify the Capitol pic.twitter.com/1TrgNTteJN

Speaking to Americans on Wednesday, Biden said America’s democracy is “under unprecedented assault, unlike anything we’ve seen in modern times.”

However, Biden said the actions of these “extremists” do not reflect the “true America.”

“They do not represent who we are,” he said, adding that “it must end now.”

Let me be very clear: the scenes of chaos at the Capitol do not represent who we are. What we are seeing is a small number of extremists dedicated to lawlessness. This is not dissent, it's disorder. It borders on sedition, and it must end. Now.

Biden called on Trump to “go on national television now to fulfill his oath and defend the Constitution and demand an end to this siege.”

Biden said today is a “painful reminder” that “democracy is fragile.”

.@SenSchumer and I are calling on President Trump to demand that all protestors leave the U.S. Capitol and Capitol grounds immediately. pic.twitter.com/z6D8qb6bpe

In a video posted to Twitter just before 4:30 p.m. ET, Trump told his supporters: “You have to go home now.”

However, in the video, Trump continued to assert baseless claims that the election had been “stolen.”

Earlier, the president tweeted, asking people at the Capitol to “remain peaceful,” despite reports of protesters and police clashing.

“No violence! Remember, WE are the Party of Law & Order — respect the Law and our great men and women in Blue. Thank you!” he wrote.

According to a Reuters report, the building was considered secured just before the curfew came into effect.

House Sergeant at Arms Paul Irving told House members the building was cleared after they spent several hours in lockdown.

Speaking at a press conference Wednesday evening, Metropolitan Police Chief Robert Contee said a total of four people are dead as a result of the violent protests.

He said after the building was breached, a Capitol Police officer discharged their weapon striking a woman.

“She was transported to a local hospital, where after all lifesaving efforts failed she was pronounced deceased,” he told reporters.

The “tragic incident” is now under investigation, Contee said.

The other deaths occurred around the Capitol grounds.

According to Contee, one woman and two men suffered “separate medical emergencies.”

At least 14 police officers were also injured during the protests, and 52 people have been arrested, Contee said.

The police chief said during the riots two pipe bombs were recovered.

Republican Senator Mitt Romney said what happened Wednesday was “an insurrection, incited by the President of the United States.”

What happened at the U.S. Capitol today was an insurrection, incited by the President of the United States. https://t.co/NojKm86sZ2

“Those who choose to continue to support his dangerous gambit by objecting to the results of a legitimate, democratic election will forever be seen as being complicit in an unprecedented attack against our democracy,” he said in a statement.

“They will be remembered for their role in this shameful episode in American history. That will be their legacy”

Romney said Congress “must not be intimidated or prevented from fulfilling our constitutional duty.”

“We must continue with the count of electoral college votes.”

Returning to the Senate chamber just after 8 p.m. ET, Pence used his position as president of the Senate to condemn the protesters.

“To those who wreaked havoc in our Capitol today, you did not win. Violence never wins. Freedom wins,” he said. “Let’s get back to work.”

Schumer called Wednesday “one of the darkest days” in recent history, adding that those responsible should be prosecuted to the “full extent of the law.”

“They should be provided no lenience,” he said.

Schumer said the lawmakers will resume their responsibilities and “will finish our task tonight.”

-With a file from Reuters