Majority of Canadian parents plan to send kids back to school amid coronavirus: survey

By Lee Berthiaume The Canadian Press

With only weeks until classes resume, a new survey suggests the majority of Canadian parents plan to send their kids back to school but most would want classes cancelled if there is a new COVID-19 outbreak in their community.

The survey by Leger and the Association for Canadian Studies is the latest to take parents’ temperature as provinces prepare to reopen schools after sending children home this spring when the pandemic arrived.

The results suggest many parents are torn, with 66 per cent of respondents with children admitting they were worried about children returning to school but 63 per cent saying they planned to send their kids anyway.

Yet 69 per cent also felt all classes should be suspended and learning shifted back to home if there is a significant increase in COVID-19 cases in their community, with 19 per cent saying classes should continue and 12 per cent unsure either way. 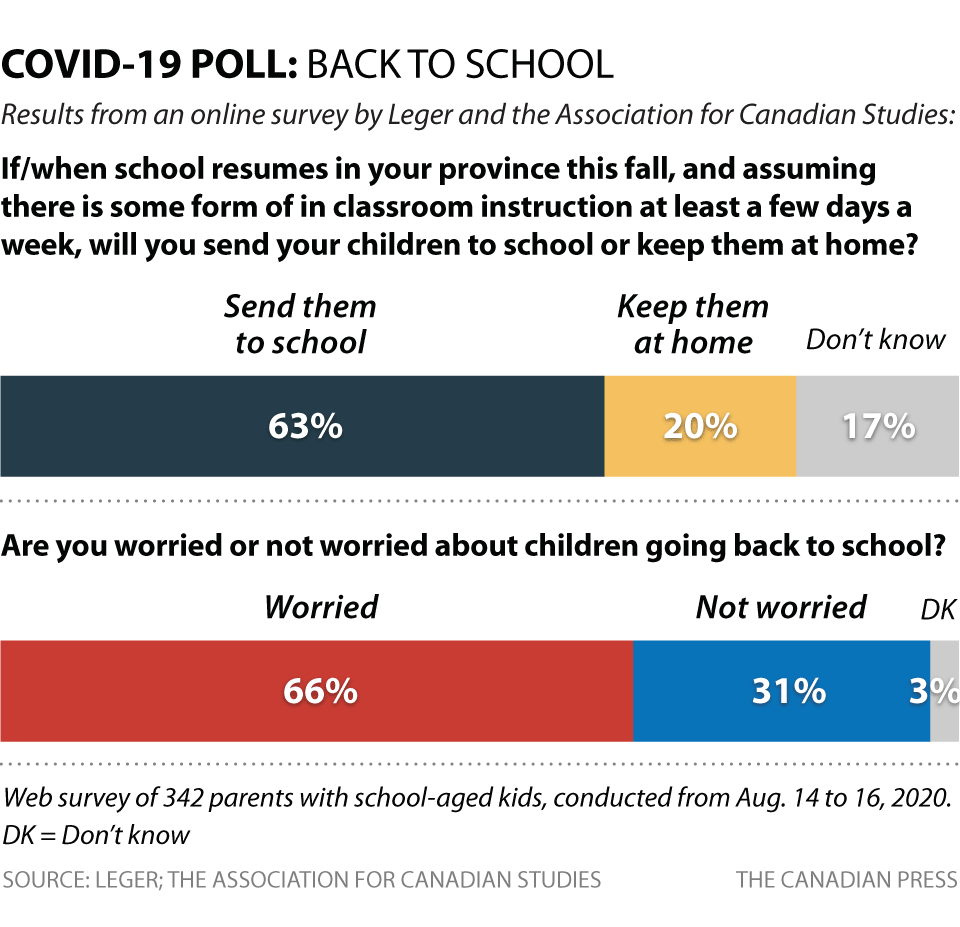 The online survey of 1,510 Canadians over age 18, including 385 parents with school-aged children in their households, took place Aug. 14-16. An internet poll cannot be given a margin of error because it is not a random sample.

The results underscore the nervousness and sensitivities around the planned reopening of school, says Leger president Jean-Marc Leger, with many parents supporting the return of classes but ready to shut it down again at the drop of a hat.

“People are nervous,” he said. “It’s a very sensitive question.”

The survey also found strong support among respondents with children for requiring certain protections to be taken to prevent the spread of COVID-19 at schools, including 76 per cent who said students should have to wear masks.

The result was not broken down by whether masks should be required for only high school students or students in both high school and elementary. Some provinces such as Ontario are requiring masks for students in certain grades but not others.

Eighty-four per cent of respondents with kids said teachers and school staff should be required to wear masks while 75 per cent supported temperature checks for children and 71 per cent wanted screening questionnaires.

“People are saying: ‘Okay, we agree. We support the government’s initiative. But at the same time, you should ensure that the rules are respected at school,”’ said Leger.

Parents were more divided over what to do if a student or teacher in their kid’s class tested positive for COVID-19.