The flight, which arrived from Ukraine, was carrying about 500 puppies, many of which were sick on arrival, according to the CFIA, a federal agency that is responsible for regulating the importation of animals into Canada.

“Upon arrival, many of the dogs were suffering from dehydration, weakness and/or vomiting,” a CFIA spokesperson said Friday.

“CFIA officials are currently investigating the circumstances surrounding this incident and will determine next steps once the investigation is complete.”

On Friday, Ukraine International Airlines released a statement on its Facebook page saying it offers condolences for the “tragic loss of animal life” on its flight.

“UIA is working with local authorities to determine what happened and to make any changes necessary to prevent such a situation from occurring again,” the Facebook post read.

On Friday, Abby Lorenzen told Global News she was picking up her friend’s cat at the airport on Saturday, June 13, when the shipment of about 500 puppies arrived. The cat was to be shipped to her friend in Western Canada the next day.

Lorenzen said she was told there were several veterinarians inspecting the animals that had arrived, but CFIA didn’t confirm to Global News how many veterinarians attended the scene prior to publication.

When Lorenzen was finally able to pick up her friend’s cat, she said he appeared “fine” and “healthy”

READ MORE: Toronto woman says she was kicked off Air Canada flight due to complaints about support dog

“I brought him home for the night, and then I had to return back to the cargo,” Lorenzen said. “I had to connect him on the flight to go to western Canada the following morning.”

When she arrived the next morning, Lorenzen said she smelled “death.” And as she was leaving, she said she saw puppy paws protruding out from the garbage outside the building.

“You could just smell death and kind of feces, urine,” Lorenzen said. “That was overwhelming.”

Lorenzen took to Facebook to report what she saw and heard. On Tuesday, Ukraine International Airlines (UIA) released a statement over Facebook in response to the information that circulated on social media, however the statement has since been deleted.

Global News has a screenshot of the airline’s initial statement. 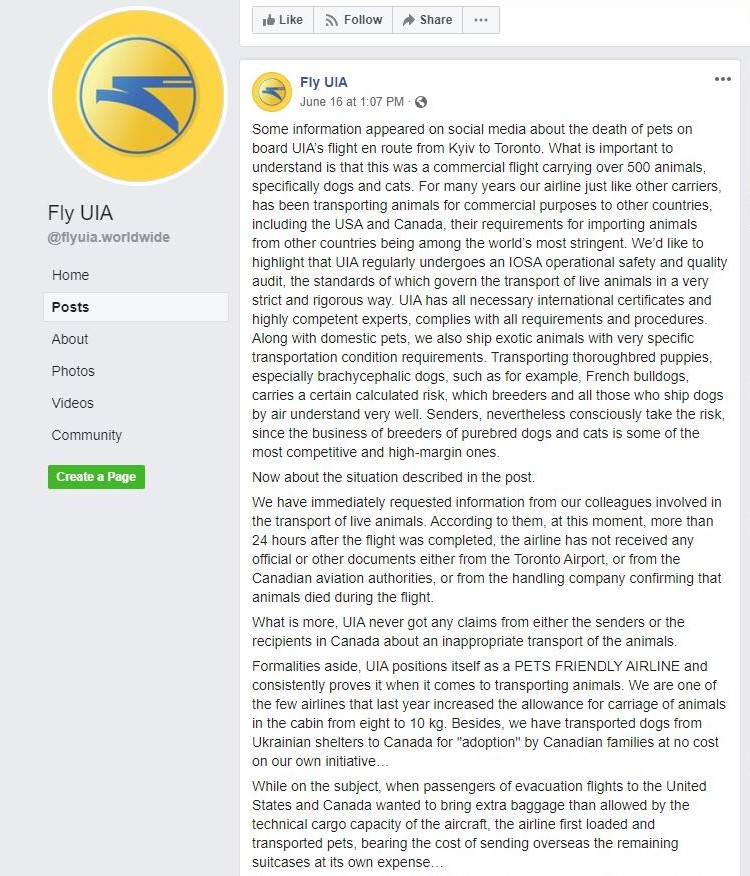 “This was a commercial flight carrying over 500 animals, specifically dogs and cats,” the UIA statement read Tuesday.

“For many years, our airline, just like other carriers, has been transporting animals for commercial purposes to other countries, including the USA and Canada.”

In Tuesday’s statement, UIA said it “immediately” requested information from its colleagues involved with transporting the animals.

“UIA regularly undergoes an IOSA operational safety and quality audit, the standards of which govern the transport of live animals in a very strict and rigorous way,” the statement read.

“UIA has all necessary international certificates and highly competent experts [and] complies with all requirements and procedures.”

In a statement Friday, a Transport Canada spokesperson said air operators are responsible for ensuring they’re complying with the Canadian Aviation Regulations.

“There are no Canadian Aviation Regulations pertaining to pets in the cabin of an aircraft or in the cargo,” Annie Joannette, an agency spokesperson, told Global News.

“Air operators set their own service policies on pets on board.”

“The import conditions are developed by taking into account the diseases and conditions affecting animals, the current national disease health status, the risk to human health, and Canada’s obligations as members of the World Organization for Animal Health (OIE) and the World Trade Organization (WTO),” the spokesperson said in a statement.

“If an animal does not meet the import requirements, an investigation will be made on the specifics of the case.”

In its Tuesday statement, UIA said transporting thoroughbred puppies carries a “certain calculated risk, which breeders and all those who ship dogs by air understand very well.”

“Senders, nevertheless, consciously take the risk since the business of breeders of purebred dogs and cats is some of the most competitive and high-margin ones.”

On Tuesday, UIA said it never got any claims from the senders in the Ukraine or the recipients in Canada about an inappropriate transport of the animals.

Global News reached out to UIA for further information but didn’t receive a response prior to publication.

Since the incident, CFIA released a statement saying all the surviving puppies were released to the importers

“Given the condition of some of the puppies upon arrival, CFIA staff recommended to the individual importers coming to collect their shipments that these puppies be immediately brought to a local veterinarian for appropriate care,” CFIA said.