By Aaron Morrison The Associated Press

The Black Lives Matter Global Network Foundation has established a fund worth more than US$12 million to aid organizations fighting institutional racism, in the wake of the George Floyd protests.

On Wednesday, the foundation, which has been influential in the emergence of the broader Black Lives Matter movement, said it was setting aside US$6 million in donations to support black-led grassroots organizing groups. Last week, it unveiled a separate US$6.5 million fund for its network of affiliate chapters.

Beginning July 1, affiliated chapters can apply for unrestricted funding of up to US$500,000 in multi-year grants, the foundation announced. Grants from both funds will be administered through a fiscal sponsor, said Kailee Scales, managing director of the foundation.

“In this watershed moment for black power building … it is critical that we democratize giving to ensure all of us have access to the resources we need to reverse centuries of disinvestment in black communities, and invest in a future where we can all be connected, represented and free,” Scales said in a statement to The Associated Press.

According to the network’s website, the organization has more than a dozen active chapters, including Boston, Chicago, Washington, D.C., and Detroit, as well as in Canada. Its newest chapter is in South Bend, Indiana.

The foundation told the AP it has received more than 1.1 million individual donations at an average of $33 per gift since the death of Floyd, a black man who died May 25 pleading for air as a white Minneapolis police officer held a knee to his neck for nearly eight minutes. The surge of financial support adds to roughly $3.4 million in net assets the BLM Global Network had on hand last year, according to a 2019 financial statement of Thousand Currents, the fiscal sponsor which receives donations on the network’s behalf and then releases money to the group.

Creation of the funds signals a growth in infrastructure for the network, which had been at odds with some local chapter organizers, who felt network leaders weren’t providing enough financial support for initiatives such as rapid response to police brutality. Although there are many groups that use “Black Lives Matter” or “BLM” in their names, only 16 are considered affiliates of the global network.

For Black Lives Matter Los Angeles, the network’s first official chapter, the fund will increase its capacity to support families in need of legal aid, public communications strategy and other services after a loved one is killed by police, said organizer Melina Abdullah, who is a professor in the Pan-African Studies department at California State University, Los Angeles.

“We’ve been struggling for seven years now with very limited resources,” Abdullah told the AP. “We’re not paid. But we also have real costs, even if we’re not taking salaries.”

Renewed energy in the BLM movement has created a need for more resources, she added. “This fund will allow us to move forward in really strong ways.” 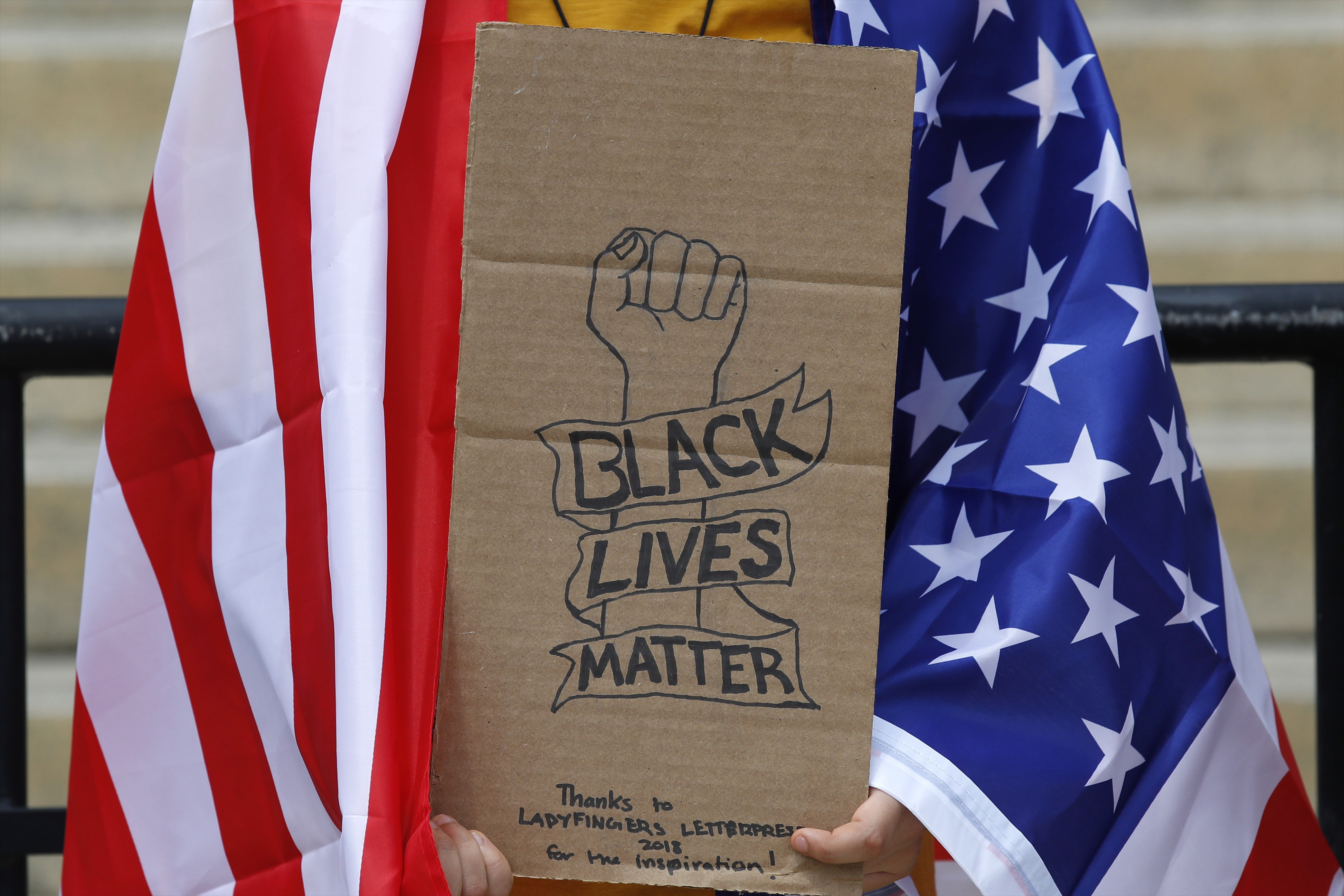 FILE – In this June 6, 2020, file photo, a demonstrator protests at the Lincoln Memorial in Washington, over the death of George Floyd, a black man who was in police custody in Minneapolis. Black Lives Matter Global Network Foundation, the group behind the emergence of the Black Lives Matter movement, has established a more than $12 million fund to aid organizations fighting institutional racism in the wake of the George Floyd protests.Racial justice groups across the U.S. have reported receiving tens of millions of dollars in donations, particularly for community bail funds posting bond for protesters arrested in demonstrations. The wealth is being spread across younger grassroots organizations and legacy institutions, such as the NAACP Legal Defence and Education Fund and the National Urban League.

The Black Lives Matter movement emerged in 2013 amid anger over the acquittal of George Zimmerman, the Florida man who shot and killed 17-year-old Trayvon Martin in 2012. The network of chapters was formed in 2014, following what organizers called Ferguson October, a national mobilization in response to the police shooting death of 18-year-old Michael Brown in Ferguson, Missouri.

“I’m really proud of the work we’ve been able to do in the last seven years,” Patrisse Cullors, co-founder and chairwoman of the Black Lives Matter Global Network Foundation, said in a statement. “What is clear is that Black Lives Matter shares a name with a much larger movement and there are literally hundreds of organizations that do impactful racial and gender justice work who make up the fabric of this broader movement.”

The foundation has already identified several movement organizations that it would like to support, said Cullors, who declined to name the groups. The foundation says it will “prioritize mutual aid organizations, direct service and organizations focused on creating sustainable improvements in the material conditions for all black people.” It also looks to support black lesbian, gay, bisexual and transgender-led groups.

Over its nearly six years of existence, the BLM Global Network had received contributions from high-profile donors, including A-list entertainers such as Jay-Z, Beyonce and Prince, who contributed to BLM mere weeks before his death in 2016. But unanswered questions of transparency and access to those gifts left some organizers in network affiliate chapters frustrated.

In January 2018, a New York City chapter announced its decision to leave the BLM Global Network, citing the need for autonomy to better serve its community. In December 2019, a different group of organizers in New York rejoined the network, Scales said.

READ MORE: Should racism be treated as a public health issue? Experts explain pros and cons

In recent weeks, the BLM Global Network has had to debunk misinformation from conservative activists who claimed the group’s donations were being redirected to the Democratic Party.

The network has also been in a tug of war with a California-based organization called the “Black Lives Matter Foundation,” which has accepted donations that do not support the movement. The other group reportedly raised millions of dollars in recent weeks from small individual gifts and from employees of large corporations, such as Apple and Microsoft, who believed they were supporting the Black Lives Matter Global Network Foundation.

Morrison is a member of the AP’s Race and Ethnicity team. Follow Morrison on Twitter at https://twitter.com/aaronlmorrison.