A year after Elliot Lake mall collapse, a community that ‘can’t seem to move on’

Heather Richer was in her van at dawn June 24, ready to drive to work before her Sunday customers trickled in.

It was only after the car was in motion that she remembered: There was no work to go to. The mall that housed her restaurant was a crumpled hulk after a crashing rooftop parking lot sent concrete slabs through two floors the previous afternoon.

“I started going to the mall and I thought, ‘What are you doing?’” she said in an interview this week. “This has been your life for the last four years. The routine, it’s very hard to break.”

An inquiry into the collapse is ongoing amid revelations regarding the structure’s safety and a tussle over which documents its owner’s obliged to disclose.

But for many of those left jobless or in mourning, that inquiry offers little respite (although they continue to follow it closely). And while many are party to a $30-million class action, they nonetheless wish they could put the whole thing behind them.

Read: Amid search for Elliot Lake survivors, a scramble to manage the message

For Gary Gendron, “it’s just too much stuff. It’s been almost a year now [since] it’s happened but it just seems like it happened yesterday.”

Gendron’s fiancé Lucie Aylwin was crushed when the mall collapsed, trapped under debris at the lottery kiosk where she worked. Gendron remembers the ensuing five days as a sleepless blur, fuelled by Red Bull and anxiety. He can’t stomach the stuff any more.

“It’s something you would never, ever want to relive,” Richer says.

“One minute you see it, one minute it’s gone. You can hear people yelling and screaming, not knowing where to go.”

Richer was in the food court when it happened –  “I was actually out there serving a customer and then, bang! … Not a bang,” she corrects herself. “I don’t even know. Like a tremor. A little mini-earthquake. And then it was gone. There was nothing.”

Water came gushing from broken pipes, reaching up past her knees.

People “were panicking. They had no idea where to go. There were people bleeding.”

She remembers helping one injured man, his face cut and bloodied, out of the building. Every time she runs into him and his wife, they thank her. It’s discomfiting.

Laurie Contant was at the cash at the clothing store she managed when she heard a rumble, then a series of claps – “like something falling on flour.”

In a state of shock, Contant closed the cash and herded bewildered customers out of the store.

It wasn’t until Contant finished closing up the shop that the suffocating fear set in. “It just hit me: What if it’s a domino effect and everything starts to fall? Then, the fear was so great … like where you can’t even breathe. And I was trying to run and I had heels and Diane said, ‘Slow down, cause if you fall, I can’t pick you up.'”

They made it out of the building in one piece. “We made it,” she remembers breathing. But a year after her livelihood collapsed along with the mall, Contant’s among many other Elliot Lake residents still looking for work.

“It makes me feel so devastated,” she said. And when she looks around, she doesn’t see a city that’s bounced back. “Same place, same devastation, same thing. We cannot go on, we can’t seem to move on. … It’s devastating. And we’re stuck.” 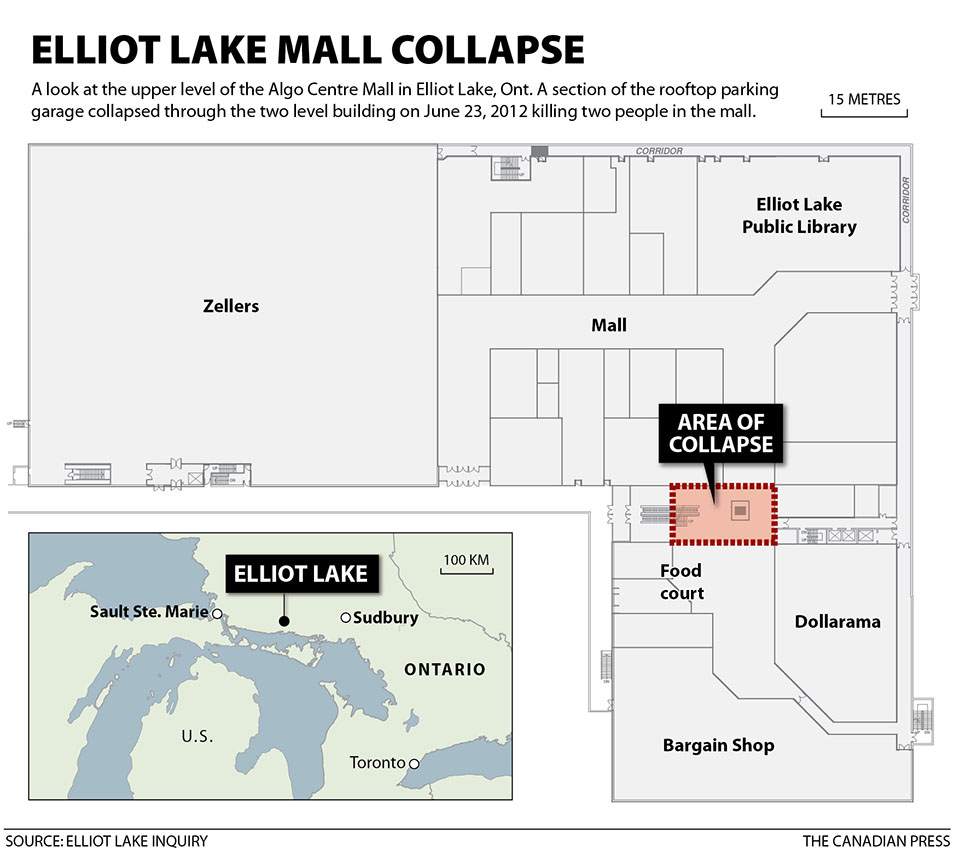