The Canadian economy added a stronger-than-expected 53,700 net jobs in September, with all the gains coming in full-time work and largely driven by the services sector, Statistics Canada data said on Friday in one of its last major economic data releases before a national election. 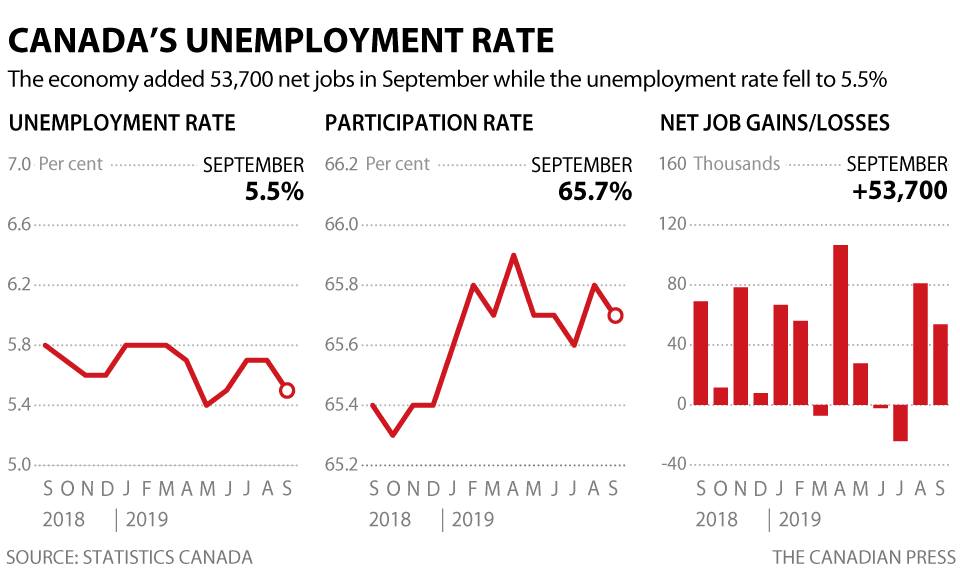 Friday’s employment figures will likely be welcomed by Canadian Prime Minister Justin Trudeau, whose governing Liberals are facing a tight re-election campaign against the opposition Conservatives. Canadians vote on Oct. 21.

Ontario, Canada’s largest province and a key political battleground in an election that has largely focused on economic issues, gained a net 41,100 jobs in September, far outpacing its other provincial and territorial counterparts.

READ MORE: Ridings to watch: ‘The GTA is where this election is going to be won and lost’

Statscan said the services sector gained 49,400 jobs in September, mostly in the healthcare and social assistance sectors, while the goods-producing sector saw an increase of 4,300, because of the construction industry. Meanwhile, the number of full-time jobs rose by 70,000, while part-time jobs fell by 16,300.

Canada’s central bank has not moved interest rates since October 2018, even as some of its counterparts – including the U.S. Federal Reserve – have eased. The Bank of Canada has said the Canadian economy is showing a welcome degree of resilience against negative shocks, in part, because of a strong labor market.