Cannabis plants can be big, if everything has gone well during the growing season. And as they get closer to harvest, they unavoidably get smellier.

Love them or hate them, the plants can be hard to hide.

That means outdoor home growers have to worry about not only mould, ill-timed rain and frost but also about thieves.

READ MORE: Almost a year after legalization, why do legal sellers offer home growers so little?

If all goes well, a large plant can yield 500 grams or so of dried flower. Legal, taxed marijuana goes for about $10 a gram, which means that a single successful plant, as it nears harvest, can be worth somewhere in the range of $5,000.

Unfortunately, it’s valuable to anyone who wants to steal it as well.

Jenna Blais came home on Monday to find her two outdoor plants in South Dundas, Ont., missing. She says they were a metre or so tall and not ready for harvest.

“It was kind of like a cartoon where you’re walking and think, ‘Something’s up’ and you turn and look, and they’re gone,” she says. “I stopped, I stopped everything. I called my parents, I called my boyfriend and said: ‘Did you harvest early? You didn’t tell me. What’s up?’ He said no and he said: ‘The plants weren’t stolen, were they?’

WATCH: It’s not hard to find Canadians who grow their own weed — but it’s virtually impossible to find any who bought seed from legal retailers

One of the plants was cut off at the stalk, and the other was roughly uprooted, she says.

“There was a trail of leaves from the left of where they were planted, and I could follow them up until a certain point. If I could have followed them all the way, I would have knocked on the people’s door and been like, ‘Uh, where’s my stuff?’ But it basically just trailed off.”

Growing weed outdoors is appealing — it needs little equipment, smells are kept out of the house, and the sun provides the light for free. But there’s a major downside.

As outdoor home growers move toward harvest, many across Canada are finding that somebody else beat them to it.

In B.C., plants can’t be visible from areas accessible to the public. In New Brunswick, outdoor plants can only be grown in a locked, fenced enclosure.

But some other provinces, like Ontario, have no restrictions on home grows beyond the federal ones: that plants must be grown in or near the grower’s home and that there must be no more than four plants in a household.

WATCH: Cannabis is safer for long-term consumption than alcohol — expert

Not everybody’s property has a place that’s both discreet and a good place to grow large plants.

“We don’t really have a lot of privacy because you can see our home from the front and also from the side,” Blais says. “I thought that if I put them behind our garage, there wouldn’t be enough sun for them.

“You could definitely smell them. That’s probably how they figured it out, that I had some, because you could really smell them.”

Having your plants stolen is, at best, an expensive annoyance, but things can turn darker.

Early last Saturday morning, an Oshawa, Ont., homeowner who confronted suspected plant thieves in his backyard was stabbed. He suffered serious but non-life-threatening injuries, police say, and had to be taken to a trauma centre in Toronto, 50 kilometres away.

WATCH: For those who live in provinces that allow marijuana home grows, here’s how to get your hands dirty

Can you claim a stolen cannabis plant on your home insurance policy?

And, yes, if the worst happens, you will need a police report.

“As with any type of theft from your home, cannabis plants should not be treated any differently when it comes to them being stolen,” she says. “I would advise making a police report as soon as possible.”

DeFrenza also says your grow should be legal in all respects for a claim to be paid out. The grey market may offer a far better choice of genetics, but sourcing from unsanctioned providers may lead to your insurance claim for stolen plants being turned down. So may growing more than four plants.

The insurance company also isn’t likely to pay anything close to the value of the plants.

“I have seen some companies cover up to a maximum of $100 per plant while others would have a limit of $125 per plant, which would work out to a maximum of $400 or $500 if you were to grow the maximum legal amount,” she says.

“I had two really beautiful plants,” she says. “They were large and green and lush, and I’m really sad that they’re gone. They weren’t ready 100 per cent for their harvest period so when I woke up and saw that they were gone it was a really, really hard thing for me.

Police we talked to didn’t have specific numbers about how often cannabis theft was being reported to them, or advice about how to avoid having plants stolen.

“The Toronto Police Service does not have specifics on how to keep marijuana plants safe,” Const. Victor Kwong wrote in an e-mail.

“The same tips would apply to theft of roses or prized petunias: crime prevention through environmental design (lighting, visibility, fence, etc.) and being a vigilant neighbour.”

Ottawa police said they hadn’t seen a significant number. Several police officers we spoke to pointed out that it is hard to say if it’s a growing problem, since few people would have reported stolen plants when cannabis was still illegal.

“We don’t have any data about whether this has increased, or anything like that,” said London police Const. Sandasha Bough. “It’s something we would have to look at next year.”

London police have had 11 reports of stolen cannabis plants since legalization, she said.

An eastern Ontario man, who asked Global News to remain anonymous, has not had the two plants on his back porch stolen — and he’d like to keep it that way.

As harvest time nears, he’s taken the precautions he can to protect them by installing a security camera — “I find myself obsessively checking my camera feed multiple times a day,” he says — as well as a sign warning would-be thieves about the camera and a makeshift barricade made from a barbecue.

“There are maybe two or three weeks before I want to pull it down,” he says. “Now is when I start getting nervous because it’s looking good. I want to make it last as long as I can, and this is a perfect time for somebody to come and take it.”

He says the plants have an unmistakable smell that can be noticed on the other side of his house.

“The camera and the sign are more to keep the honest thieves away. ‘Well, they’ve got a camera, I’m going to look somewhere else.’ It doesn’t really prevent somebody from coming up with a mask and just taking it,” he says. “They totally could.” 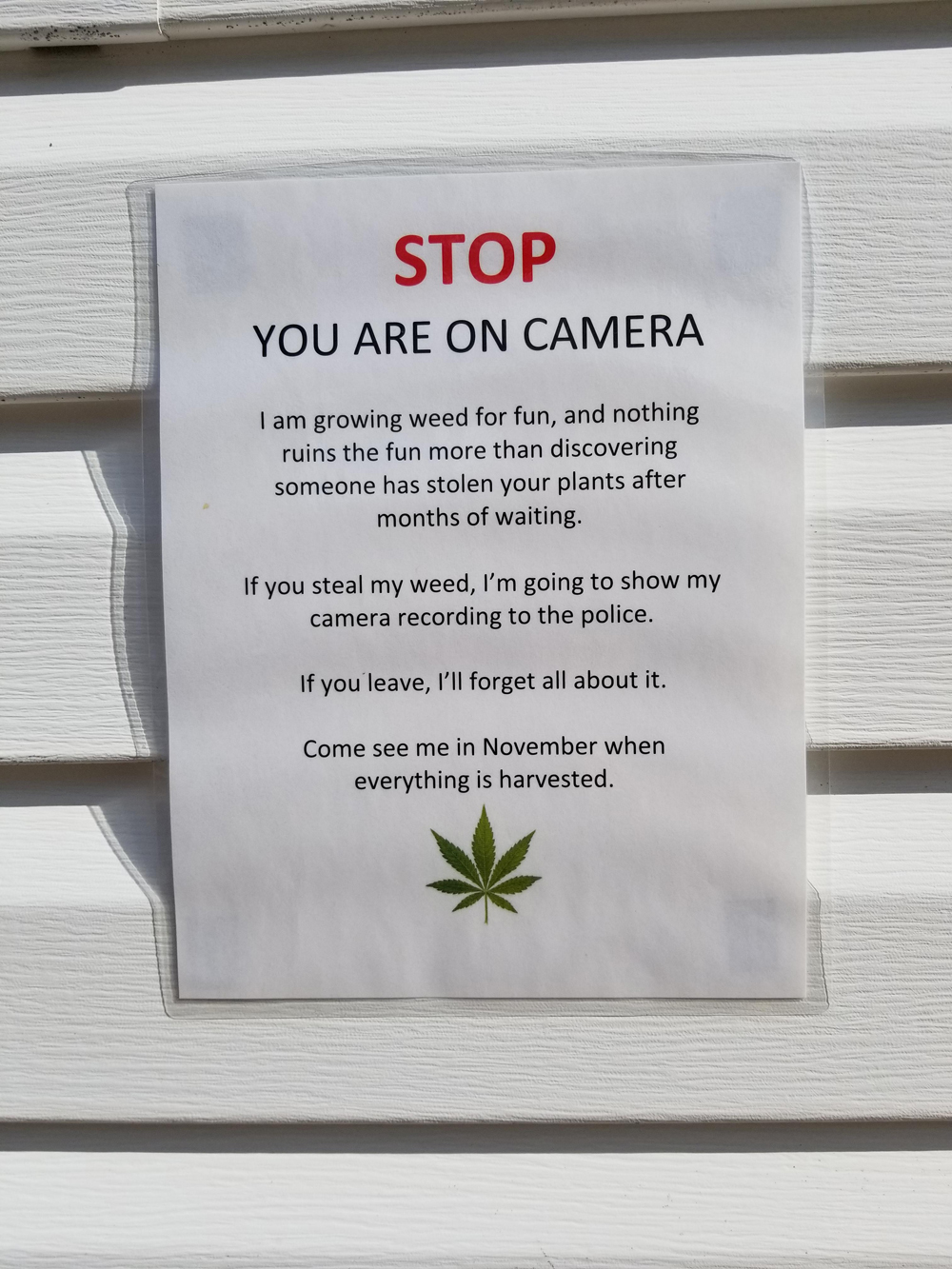