Thousands of alewife fish were found washed ashore on Lake Ontario this week — a common occurrence, according to wildlife officials.

Then, on Monday, he says he discovered thousands of the fish washed ashore at Wicklow Beach, about 20 kilometres east of Cobourg.

The cormorant feeds on fish, particularly the alewife, and particularly when they gather to spawn in shallow water, according to the Ontario Federation of Anglers and Hunters (OFAH). 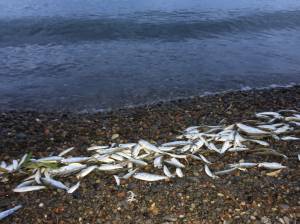 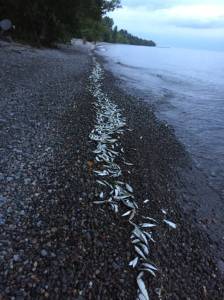 A relative of the herring, wildlife officials estimate there are two billion alewives in Lake Ontario.

The thousands of dead fish on the Wicklow Beach shores were gone by Thursday.

“They started to stink quite a bit so I shovelled and put  some of them back into the water,” said Jones. “As many as I could for a distance of a hundred metres or so. And then the wave action came up and has taken away the majority of them now.

Trending Stories
“As I looked this morning [Thursday] everything seems to be gone now and the cormorants are no longer around,” he said.

The alewife lives in cooler deep water but heads ashore to spawn, which can cause the type of die-off that Jones discovered.

“In the spring and summer months, in the shallow areas [they are] maybe not common but there are large die-offs that can occur. It’s their inability to acclimate rapidly enough to rising temperatures.”
Story continues below advertisement

Jones says he’s still in awe of the shoreland discovery.

“It’s the first time in 29 years of living here that I’ve seen that many fish wash up,” he said.

“I was a little alarmed at first but I’m pleased to know it’s a natural occurrence.”

Weir says anyone who discovers a large number of dead fish of any species is urged to contact the Ontario Ministry of Environment and Forestry.

WATCH: Cobourg beach bounces back after record levels on Lake Ontario in spring