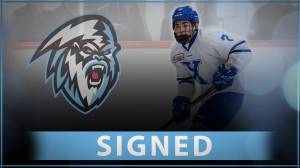 Matt Savoie Photo supplied by Winnipeg ICEThe determination of the Winnipeg ICE to take the best player in last month’s Western Hockey League Bantam draft has paid off. The ICE have announced the signing of No. 1 overall pick Matthew Savoie of St. Albert.

“Today is an exciting day for the City of Winnipeg and the Winnipeg ICE franchise,” said President and General Manager Matt Cockell in a team news release. “Matt is an elite player and we are excited that he has chosen the WHL and Winnipeg ICE to continue his development.”

Back in mid-March Savoie committed to the University of Denver after being denied exceptional status by Hockey Canada to play in the WHL this coming season as an underage. So when the ICE won the WHL Draft Lottery on Mar. 20, there was some question whether they would risk using that pick on Savoie.

The 15-year-old, 5-9 and 172 pound right shot forward scored 31 goals and added 40 assists for 71 points in just 31 games this past season for the Northern Alberta X-Treme of the Canadian Sport School Hockey League. Savoie was also among the top scorers in the 2019 Canada Winter Games in Red Deer, leading Alberta to a bronze medal finish with six goals and seven assists for 13 points in six tournament games.

SAVOIE DOES IT AGAIN!!

Matthew Savoie puts up 2G and 2A for 4TP in a victory over New Brunswick at the Canada Games U16s. The 2004 has proven to be the best player at this tournament dominated by 2003s. Savoie is the #1 prospect for the #2022NHLDraft. pic.twitter.com/oa1SwZIB6P

Savoie racked up those numbers while playing in a league where the majority of the players are two and three years older. It’s for that reason the talented forward has been described as a “generational talent”.

The ICE open their WHL preseason schedule on Sept. 6 against the Wheat Kings at Westoba Place in Brandon.