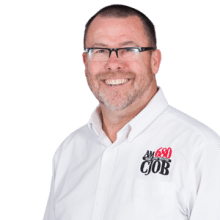 Kelly Moore is well into his 5th decade of working in Radio, including a second stint with 680 CJOB where he is now the voice of sports.

The veteran broadcaster began his career in April of 1976 as a part time evening announcer at CFVR in Abbotsford, B.C. In the fall of that year, Moore was hired as a sports reporter by NL Broadcasting in Kamloops, BC and spent 18 years there before coming to Winnipeg the first time in the summer of 1994.

The former play by play broadcaster of the WHL Kamloops Blazers was selected from a group of more than 80 applicants to succeed Curt Keilback as the Radio Voice of the 1.0 Winnipeg Jets on CJOB.
Moore also called the first 10 seasons of the IHL/AHL Manitoba Moose before leaving the Broadcast Booth in the Spring of 2006 to accept the challenge of helping to launch a brand new Country Station with the company he had worked for prior to coming to Winnipeg. But when the Jets 2.0 and the National Hockey League returned to Winnipeg, so did Moore as he accepted an offer to coordinate CJOB’s Hockey Coverage, and take over as Sports Director following the “semi-retirement” of Bob Irving.

Moore’s personal broadcasting highlights include calling the Blazers first ever Memorial Cup Title in 1992 and making his NHL Radio debut in January of 1995, serving as the Western Canadian Radio Play By Play voice of the 1999 World Junior Tournament in Winnipeg, anchoring CJOB’s extensive coverage of the 1999 Pan-American Games, and launching Country 103 in Kamloops.

Kelly and his wife Karen have been married for 40 years and are the proud parents of daughters Lyndsey and Chelsey, as well as doting grandparents of Jameson, Sullivan and Wells.