‘We were quite frightened’: passengers describe dramatic rescue from Norway cruise ship

By Mark Lewis and Jari Tanner The Associated Press

Rescue helicopters took more than 475 passengers from a cruise ship that got stranded off Norway’s western coast in bad weather before the vessel departed for a nearby port under escort and with nearly 900 people still on board, the ship’s owner said Sunday.

The Viking Sky carried 1,373 passengers and crew members when it had engine trouble in an unpredictable area of the Norwegian coast known for rough, frigid waters. The crew issued a mayday call Saturday afternoon.

Five helicopters flying in the pitch dark took passengers from the tossing ship in a painstaking process that continued throughout the night. The rescues took place under difficult conditions that included wind gusts up to 38 knots (43 mph) and waves over 8 meters (26 feet) high.

Photos posted on social media showed the ship listing from side to side and furniture smashing violently into walls.

“We understand 20 people suffered injuries as a result of this incident, and they are all receiving care at the relevant medical centers in Norway, with some already having been discharged,” Viking Ocean Cruises, the company that owns and operates the ship, said.

The company said in a statement that before the ship departed for the port of Molde nearly a day after it became disabled, 479 passengers had been airlifted to land by helicopters, leaving 436 passengers and 458 crew members onboard.

“We saw two people taken off by stretcher,” passenger Dereck Brown told Norwegian newspaper Romsdal Budstikke. “People were alarmed. Many were frightened but they were calm.”

Passenger Alexus Sheppard told The Associated Press in a message sent from the Viking Sky that people with injuries or disabilities were winched off the cruise ship first.

“It was frightening at first. And when the general alarm sounded it became VERY real,” she wrote. 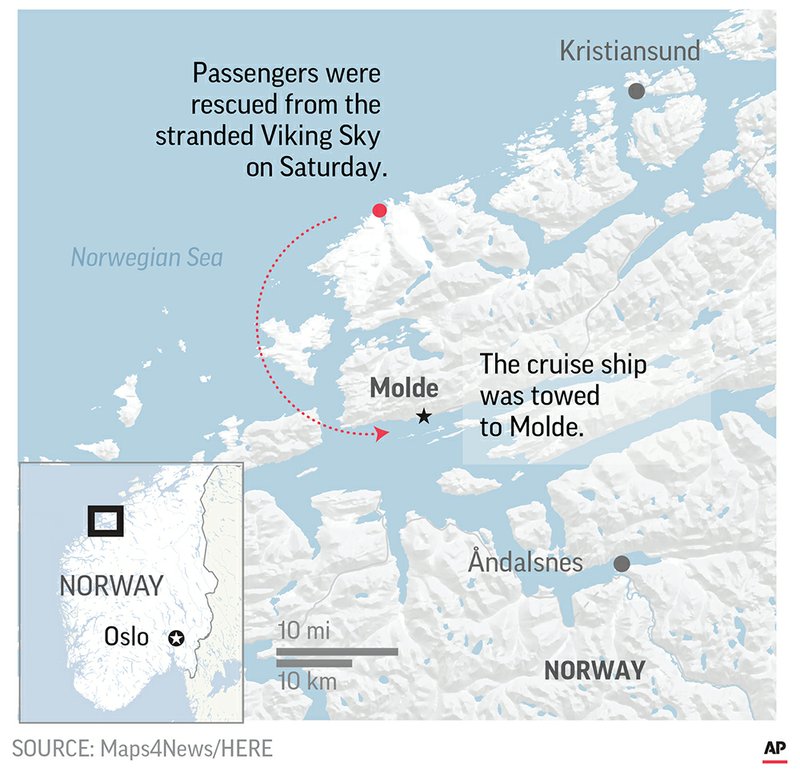 An American passenger, Rodney Horgen of Minnesota, was visiting Norway as a dream pilgrimage to his ancestral homeland when the trip quickly turned into a nightmare.

Horgen, 62, said he knew something was badly amiss when the guests on the tossing cruise liner were all brought to the ship’s muster point. He felt sure the end had come when a huge wave crashed through glass doors and swept his wife, Judie Lemieux, 30 feet across the floor.

“When the windows and door flew open and the 2 meters of water swept people and tables 20 to 30 feet, that was the breaker. I said to myself, ‘This is it,’” Horgen recalled. “I grabbed my wife but I couldn’t hold on. And she was thrown across the room. And then she got thrown back again by the wave coming back.

Hands and faces of fellow passengers were cut and bleeding from shattered glass, he said. An experienced fisherman, Horgen said he had never experienced such rough boating conditions.

“I did not have a lot of hope. I knew how cold that water was and where we were and the waves and everything. You would not last very long. That was very, very frightening.”

Police said the crew, fearing the ship would run aground, managed to anchor in Hustadvika Bay so the evacuations could take place. A tug boat and two other vessels were assisting the Viking Sky travel from the bay to Molde.

Coast guard official Emil Heggelund estimated to newspaper VG that the ship was 100 meters (328 feet) from striking rocks under the water and 900 meters (2,953 feet) from shore when it stopped.

The ship was visiting the Norwegian towns and cities of Narvik, Alta, Tromso, Bodo and Stavanger before its scheduled arrival Tuesday in the British port of Tilbury on the River Thames. The passengers mostly were a mix of American, British, Canadian, New Zealand and Australian citizens. 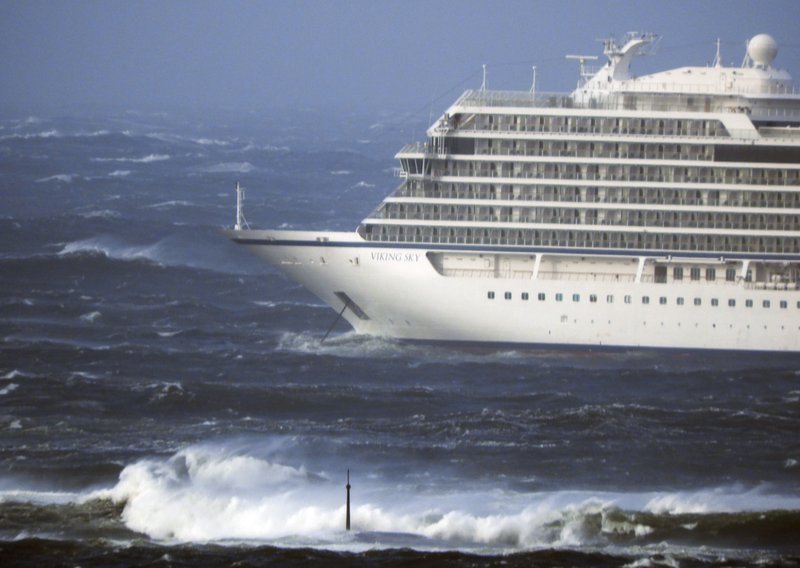 The airlifts continued at a steady pace Sunday morning, as the vessel was being prepared for towing by two tugboats to the nearby town of Molde, according to Per Fjerd at the Joint Rescue Coordination Center.

The helicopters stopped taking people off the ship when the ship was ready for the trip to shore. Three of the ship’s four engines were working as of Sunday morning, the center said.

Norway news agency NTB reported Sunday afternoon the Viking Sky was traveling under its own power at a speed of 7 knots and not being towed. It was expected to arrive around 6 p.m. local time (1700 GMT) at the earliest.

The Viking Sky, a vessel with a gross tonnage of 47,800, was delivered in 2017 to operator Viking Ocean Cruises.

Viking Cruises chairman Torstein Hagen praised the rescue operation by Norwegian authorities and the actions of the vessel’s crew.

He told Norway’s VG newspaper that the events surrounding the Viking Sky were “some of the worst I have been involved in, but now it looks like it’s going well in the end and that we’ve been lucky.”

WATCH: Passengers evacuated from cruise ship off coast of Norway

Shipping tycoon Hagen is one of Norway’s richest men and the founder of the Switzerland-based Viking Cruises that operates river and ocean cruises under two business units.