The Bank of Canada (BoC) is keeping its key interest rate target on hold at 1.75 per cent on Wednesday, citing concerns about the global economy and Canada’s own recent performance.

The central bank said the current slowdown in the world economy has been “more pronounced” than it anticipated in its January forecast. Trade uncertainty is “weighing heavily” on economic performance around the globe, even as progress in the U.S.-China trade talks had helped to improve market sentiment, the BoC said in a statement.

In Canada, the BoC also expects the economy to be weaker in the first half of 2019 than it projected in January, adding it is watching developments in household spending, oil markets and global trade.

The Bank of Canada has raised its rates five times since July 2017, though it has held its overnight interest rate steady at 1.75 percent since October of last year. 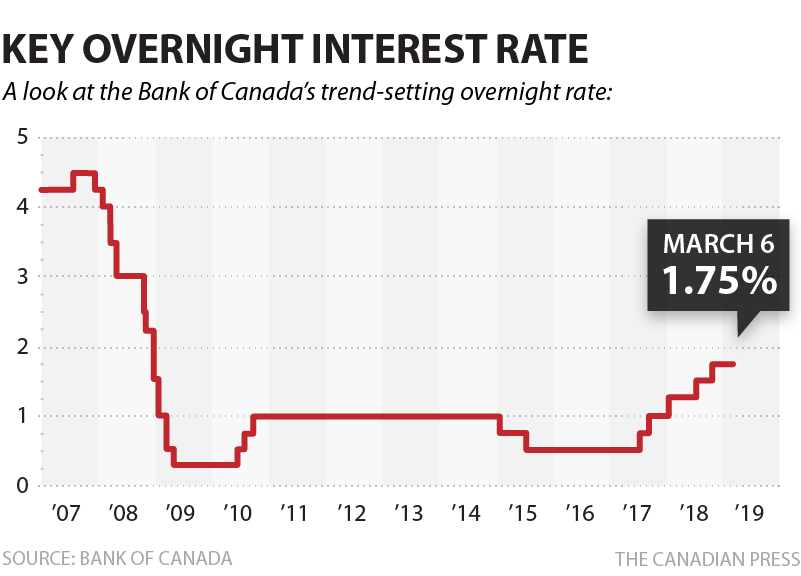 It made clear on Wednesday that future hikes were still on the table, but not imminent.

“Governing Council judges that the outlook continues to warrant a policy interest rate that is below its neutral range,” it said in a statement, adding that there was “increased uncertainty about the timing of future rate increases.”

Tweet This Click to share quote on Twitter: "Governing Council judges that the outlook continues to warrant a policy interest rate that is below its neutral range," it said in a statement, adding that there was "increased uncertainty about the timing of future rate increases."

READ MORE: Gig economy could be dragging down wages for everyone — even those with regular employment

The Bank of Canada said it expects inflation to be slightly below its 2 percent target for most of 2019 on temporary factors, including lower energy prices and a wider output gap.

Recent data showed consumer spending and the housing market were soft, it said, despite strong growth in employment and labor income, with exports and business investment falling short of expectations.

Given the mixed picture, the central bank said it would “take time to gauge the persistence of below-potential growth and the implications for the inflation outlook.”

Last month, Bank Governor Stephen Poloz said interest rates still need to move up into the neutral range, pegged at between 2.5 percent and 3.5 percent, but he warned that the path back was “highly uncertain.”

Indeed, the central bank’s neutral rate range has become contentious, with bond investors warning that it may be too high for Canada’s debt-laden economy, hurting its use as a signpost for monetary policy.