Hamilton is among the best cities for youth to work

Hamilton is among Canada’s top cities for youth to work, according to a new ranking issued by a Canadian bank.

YouthfulCities has launched its inaugural Urban Work Index, the first of its kind to look specifically at urban work in Canada.

The index, funded by Royal Bank of Canada, ranks 21 Canadian cities and found Edmonton to be the top-ranked city in the country, followed by Montreal, Ottawa, Sudbury, and Kitchener/Waterloo, while Hamilton came in sixth place.

Hamilton also placed third on the list of cities with the most affordable rent and second on the gender parity scale.

The index ranked the cities based on 48 urban work indicators, which include four thematic areas: education, entrepreneurship, affordability, and employment.

Then, Canadian cities were ranked out of a total 1,310 points based on the scores.

Here are some of the results: 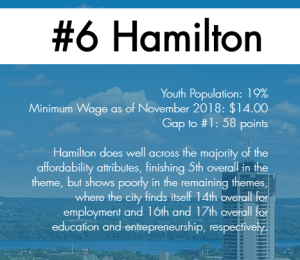