‘It’s not stopping’: Sinkhole in Oxford, N.S. growing bigger by the day

The Oxford and Area Lions Parkland on Main Street in Oxford, N.S., is typically a popular spot for people of all ages to spend their summer days. But lately, the park has been completely off limits.

That’s because a large sink hole has opened up and it’s too dangerous for people to be at the park.

“It swallowed about an eight-inch maple tree and about a 24-inch spruce tree, 40 feet high and it just swallowed it,” said Bruce Selkirk, a member of the Oxford Lions Club.

“It was like flushing a toilet. It was gone.”

Selkirk says members of the club first noticed the sink hole around the end of July while a wedding reception was taking place. According to him, the sink hole continues to grow every day.

In fact, he says the Lions Club is now concerned about their community centre, which is located nearby.

READ MORE: The night a Nova Scotia house fell into the ground

Although maps of the area show the prospect that a sink hole could develop, geologists say there’s no way to know when a sink hole will open up or when it will stop growing.

“You can’t predict where these are going to actually occur,” said Bob Ryan. “We can predict because of the kind of rock underneath that they will occur in the area but where in the area, is sort of similar to putting a thousand people in an open field with steel umbrellas in a lightning storm, you know its likely that one of them is going to to get hit with lightning, but which person.”

Here is a Department of Natural Resources map that shows the areas with potential for natural sinkholes. The areas shaded in blue are considered high risk for naturally occurring sink holes. 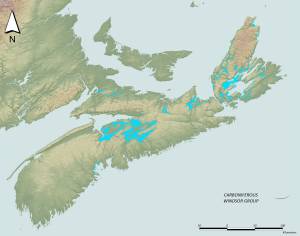 The Oxford sink hole is the second largest to open up in Nova Scotia in less than a year. Last fall, a home in Falmouth, N.S., started to fall into a sink hole in the middle of the night and had to be demolished.

It’s an incident that experts say was unusual.

“In my 40 odd years as a geologist, other than the house in Falmouth, any other structures that have been damaged have been small out buildings or barns or something,” said Ryan.

It’s unclear at this time how much damage the sink hole in Oxford has caused or when the park will reopen.