A new online survey says that Metro Vancouver residents are largely on the same page when it comes to the housing crisis.

“We’re the only place in the country where the vast majority of us choose housing as the number one issue,” said Insights West President Steve Mossop.

When asked if they believe Metro Vancouver is in the middle of a housing crisis, the survey found that “90 per cent decisively agree, including 64 per cent who say they strongly agree with that.”

Mossop adds that the level of agreement was almost unanimous for people renting a home, or making less than $40,000 per year.

LISTEN: Talking to the President of Insights West about the “major housing crisis” survey

But while that number doesn’t shock him, Mossop said in a release that “what is surprising… are the misconceptions that exist with respect to the culprits and causes of this crisis.”

“As the housing situation reaches crisis proportions, there are no shortage of scapegoats to blame, despite studies that show foreign buyers and money laundering are minor factors in the equation.”

According to the survey, Mossop said that 84 per cent of residents believe that foreign real estate buyers heavily contribute to the current housing situation.

“And then there’s the more… maybe not as controversial ones: population growth in Metro Vancouver at 80 per cent, shadow flipping popped up at number three at 76 [per cent].” 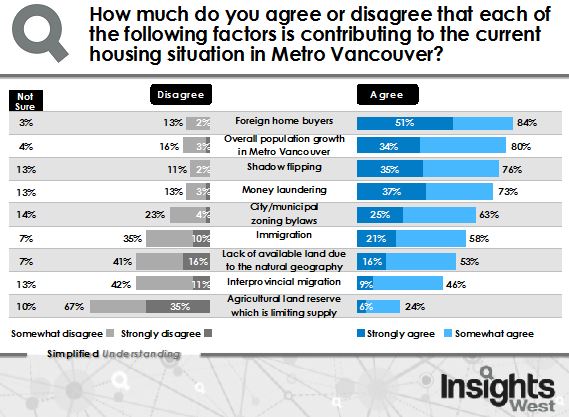 Mossop said other contributing factors include city and municipal zoning bylaws and immigration.

While many people most impacted by the housing crisis are renters, the survey showed that homeowners also don’t feel that the housing situation is impacting them in a positive way — despite increases in their personal net worth due to increasing assessment values.

Twenty-six per cent said they feel that it’s had a positive impact, while a third say there is no impact at all, and the remaining 41 per cent feel it has impacted them in a negative way.

Results of the survey are based on an online study conducted from July 10 to July 12, 2018, among 561 adult residents of Metro Vancouver, who are members of the Angus Reid Forum.

The data has been statistically weighted according to Canadian census figures for age, gender and region. The margin of error—which measures sample variability—is +/- 4.1 percentage points. Discrepancies between totals are due to rounding.

Mossop was speaking as a guest on CKNW’s Lynda Steele Show.