A long, winding look inside a virtual cave like the one 12 Thai boys have to escape

A young Thai soccer team and their coach remain trapped in an air pocket in a twisting, dangerous cave system days after they were found.

That’s because their way out is dangerous and dark – due to flooding during the rainy season in Thailand.

As you can see in Global News’ 3D model in the player above, the caves are sometimes flooded and very narrow. The current and the water flow are sometimes very strong as well.

WATCH: Global’s Eric Sorensen takes a look at how a boys soccer team and their coach became trapped in a cave in Thailand.

Some slopes are very steep and others are too narrow to get through wearing an air tank, and the divers have to hold the tanks out in front of their bodies.

The water is also very muddy, making visibility a concern.

The journey is so perilous that a former Thai navy SEAL died while ferrying oxygen tanks through the caves on Friday morning.

The BBC reports that it takes about five hours to get to the ledge the boys and their coach are stranded on.

A rescue camp has been set up outside the mouth of the Tham Luang cave system in the Chian Rai province. Families of the lost boys have been camped out there ever since the boys went missing on June 26. 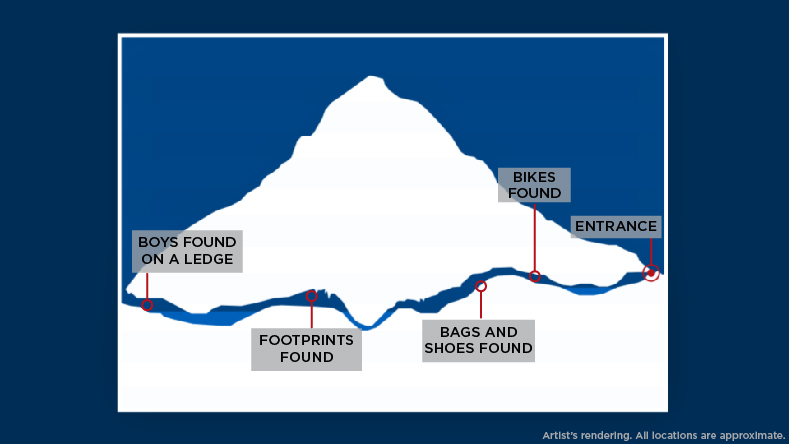 The boys’ bicycles were found near the entrance of the cave.

Deeper in the cave, divers came upon shoes and bags.

The caves have offshoots, so divers had to theorize which way the boys went. Officials expected them to be at a wider area in the cave at higher ground, in an area called Pattaya Beach.

In fact, the boys were found on a ledge surrounded by water not far past that landmark.

The rock shelf they were found on was about four kilometres from the entrance of the cave.

Rescuers have brought the boys food, oxygen and medical supplies.

There is talk of putting in an oxygen line so the trapped soccer team can get fresh air.

Officials say the boys aren’t yet strong enough to dive by themselves.

Alternative options for escape include pumping water from the caves more rain in the forecast means that could take a long time), waiting out the rainy season by constantly providing oxygen and food (which could last until October), or digging down into the mountain (which is complicated because the boys are nearly a kilometre underground).