Fans of movie star Johnny Depp are concerned about his health after photos popped up this weekend showing the actor looking skinny and emaciated. Depp was in St. Petersburg, Russia, on tour with his band, Hollywood Vampires.

#JohnnyDepp leaving Russia yesterday. 😻 Next show is in 6 hours in Hamburg, Germany.

Another photo (below, now deleted) was posted to a fan’s Instagram page. 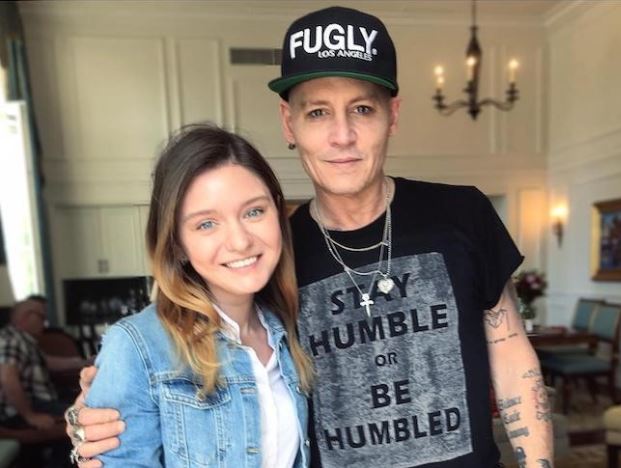 Depp, 54, posed with many fans at the Four Seasons Hotel, looking visibly thinner. He was also very pale, and without his signature long hair and goatee.

“I think my hero looks ill,” one user commented on Facebook underneath a fan photo. Others claimed he was barely recognizable, and the descriptors “skinny” and “sick” recurred frequently.

Others dismissed his appearance, saying the baseball hat and his shaved hair gave the appearance of sickness. While it’s unclear at this point whether he is ill, some proposed it was weight loss for his upcoming movie, Richard Says Goodbye, currently in post-production. In it, Depp plays the title character, a college professor who receives a life-altering diagnosis; after the professor gets the news, he goes on a bender of sorts, including excessive drinking, smoking and other harmful activities. It seems to fit the bill, but it’s presumptuous.

On Twitter, fans were either panicked or dismissive, mostly saying the rumours of illness are exaggerated. Most commenters believe it was just an unflattering photo.

What is going on with Johnny Depp?! pic.twitter.com/RGt5HPpfUM

Johnny Depp looked sick, disipated, and gaunt. I send prayers his way; in dping so, I foster a sense of hope that Mr. Depp will be with us for years to come#prayforjohnnydepp # WeloveyouCaptainJack #KeepcastingspellsGrindelwald

Just saw #JohnnyDepp in concert in Hamburg. He looks healthy, happy and he had so much fun. He didn't look sick, pale or thin at all. How pictures can deceive an impression..

People, I don't get it! Isn't it normal to look tired on airports after spending many evenings with playing concerts, meeting many fans and flying forth and back for days? He isn't 30 anymore! He has the damn right being tired and look like this after a long flight! #JohnnyDepp

I feel bad on the guys. They shouldn’t have to justify ANY photos taken or explain how they are feeling. The press are too quick to jump to conclusions.They should focus their energy on what is actually going on in the world instead of bashing somebody for being tired #johnnydepp

Johnny Depp is touring with the vampires right now. People don't realize how physically exhausting touring actually is so if he looks tired or has lost a little bit of weight it's for obvious reasons. It doesn't mean he's sick or dying.. Jesus!

The actor’s personal life hasn’t exactly been smooth sailing over the past several years: Depp has been embroiled in multiple legal disputes, including a lawsuit filed by his former management company and the messy divorce from his wife of nearly two years, Amber Heard. The former lawsuit is still ongoing, and Depp has even filed a countersuit, alleging the managers owe him millions of dollars.

READ MORE: ‘Solo’ shaping up to be the first ‘Star Wars’ box-office flop

Heard and Depp divorced in August of 2016, and she was given a settlement of $7 million, which she donated to charity.

Depp will return to the big screen in November in Fantastic Beasts: The Crimes of Gindelwald.

Global News has reached out to Depp’s reps for comment.