Fransen tweeted the videos with the descriptions: “Muslim migrant beats up Dutch boy on crutches!” “Muslim Destroys a Statue of Virgin Mary!” and “Islamist mob pushes teenage boy off roof and beats him to death!”

Britain First was founded in 2011 and boasts anti-immigration views. 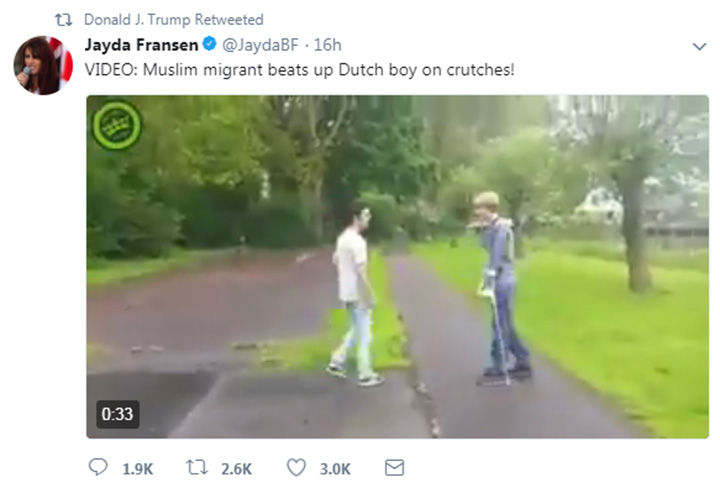 “Britain First opposes Islamic extremism and mass immigration because they are a danger to the British people,” a message reads on the group’s website.

According to British newspaper The Independent, Fransen admitted to telling the woman that Muslim females are forced to cover themselves to avoid being raped “because [men] cannot control their sexual urges” and “that’s why they are coming into my country raping women across the continent.”

Fransen is currently on bail after being charged with using “threatening, abusive or insulting words or behaviour” during a speech she gave in Ireland in August.

Trump did not offer any explanation for why he retweeted the videos.

WATCH: A tweet too far? Trump sparking outrage around the world

The video that Fransen claims to show an “Islamist mob” pushing a boy off a roof before beating him to death, was purportedly recorded in the Egyptian city of Alexandria, in 2013. Clashes erupted that summer between supporters of overthrown President Mohamed Morsi and his opponents.

According to a Reuters report, two men, Mahmoud Ramadan and Abdullah el-Ahmedi, were charged and sentenced to death for throwing youths from the roof of a building.

0:45 Theresa May says she was not given advance notice of Trump travel ban

The video in which Fransen described as a “Muslim migrant” beating a “Dutch boy on crutches” surfaced in May after it was posted on Dutch website Dumpert. At least one teenager was arrested in relation to the incident. The video shows a teenager talking to a kid on crutches before punching, kicking the teen while he was on the ground.

Dutch police made no mention in a press release following the arrest as to whether the arrested teen was a migrant or Muslim.

As for the third video “Muslim Destroys a Statue of Virgin Mary,” does in fact show a man speaking Arabic before smashing a statue and was purportedly recorded in Syria in 2013.

“President Trump is clearly telling members of his base that they should hate Islam and Muslims. These are actions one would expect to see on virulent anti-Muslim hate sites, not on the Twitter feed of the president of the United States,” CAIR national executive director Nihad Awad said in a statement. “Trump’s posts amount to incitement to violence against American Muslims. His actions should be condemned by all American political and religious leaders, regardless of their party or faith.”

The leader of U.K.’s Labour Party called on the British government to “condemn far-right retweets by Donald Trump.”

I hope our Government will condemn far-right retweets by Donald Trump. They are abhorrent, dangerous and a threat to our society.

“They are abhorrent, dangerous and a threat to our society,” Jeremy Corbyn tweeted.

A spokesperson for British Prime Minster Theresa May said Trump was wrong to share the anti-Muslim videos from the far-right party, Britain First.

“Britain First seeks to divide communities through their use of hateful narratives which peddle lies and stoke tensions. They cause anxiety to law-abiding people,” the spokesperson said. “British people overwhelmingly reject the prejudiced rhetoric of the far right which is the antithesis of the values that this country represents: decency tolerance and respect.”

However, the president did gain some support for his retweets from the likes of former grand wizard of Ku Klux Klan David Duke.

“Trump retweets video of crippled white kid in Europe being beaten by migrants, and white people being thrown off a roof and then beaten to death, He’s condemned for showing us what the fake news media WON’T. Thank God for Trump! That’s why we love him!” the white nationalist tweeted.

Trump retweets video of crippled white kid in Europe being beaten by migrants, and white people being thrown off a roof and then beaten to death, He's condemned for showing us what the fake news media WON'T. Thank God for Trump! That's why we love him!

In defence of Trump’s tweets, White House Press Secretary Sarah Sanders said the authenticity of the videos doesn’t matter because the “threat is real.”

“I’m not talking about the nature of the video,” Sanders told reporters. “I think you’re focusing on the wrong thing. The threat is real and that’s what the president is talking about. The need for national security, the need for military spending and those are very real things, there’s nothing fake about that.”

–with a file from the Associated Press