Will & Grace returned to TV screens last night for the first time in over a decade with a string of jokes targeted at Donald Trump.

The revival included many jokes at the expense of  U.S. President Trump, including a joke about his skin tone being comparable to Cheetos and a poke at his “Make American Great Again” campaign slogan, re-worked on Will & Grace as “Make America Gay Again.”

READ MORE: ‘Will & Grace’: 6 things to expect from the comedy reboot

3:29 Will & Grace comes back to Global on Thursdays
Story continues below advertisement

As part of the episode’s plot, Trump-supporter Karen (Megan Mullally) reveals that she has landed Grace (Debra Messing) the opportunity to redesign the Oval Office.

When the pair arrives at the White House, an employee tells Karen and Grace, “The owner would like you to know it’s the best Oval Office you’ll ever see.”

Once they are inside the Oval Office Grace finds a Russian-to-English dictionary and a fidget spinner on the president’s desk. 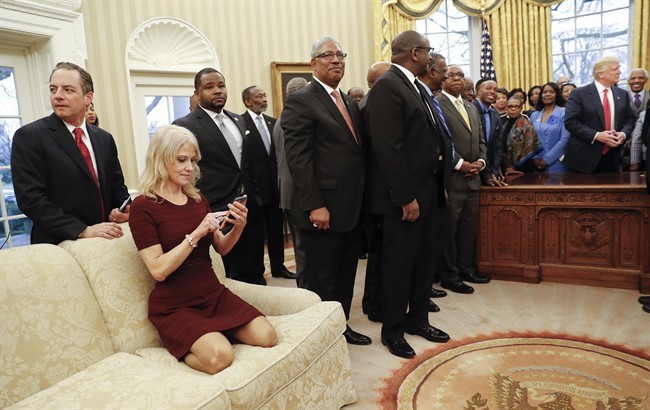 By the end of the episode, Grace left a “Make America Gay Again” hat on Trump’s desk chair.

Trump's twitter tantrum tomorrow should be great. All about #WillAndGrace cuz you know…that's what he pays attention to. Great show!

Trump is going to explode all over twitter when he sees this! 😂😂😂😂 little man! #WillAndGrace

Trump's response to the new Will & Grace premier should be… interesting.

Re: Oval Office: "I need to make sure the drapes work well with his coloring" *opens up a bag of cheetos* I can't!! 😂😂#WillAndGrace

These political jokes are so on point! God, I’m so glad this show is back! 👌🏼😂👌🏼😂👌🏼😂👌🏼😂 @WillAndGrace #WillAndGrace @nbc pic.twitter.com/MYxP7qORZo

Thank you, @WillAndGrace, I needed that!!! ❤️

Remember when #WillandGrace was on TV espousing progressive views in an era defined by a brainless Republican president?@WillAndGrace #TBT pic.twitter.com/Wsxc9XtcDJ

#WillAndGrace I really hope the jokes about politics are even handed and make everyone laugh. Trump bashing is not going to work

#WillandGrace is going in on the WH big time. pic.twitter.com/YJAclhp6ua

Omg making sure the curtains match Trumps colouring and Grace pulls it a bag of cheetos #WillAndGrace pic.twitter.com/PMeoIdwkXB

#WillAndGrace is so overtly political that's it's almost refreshing pic.twitter.com/AaMvpGtqMh

READ MORE: ‘Will & Grace’ revival has been expanded

The show’s co-creator David Kohan said the new series was intended to be an “antidote” to current tensions.

“I actually think that is what the appeal of what the show is right now, this whole sense of I want to be back on comfortable solid ground with characters that I’m familiar with, that I know, that I want to laugh with,” he told Variety. “Because I’m anxious right now. This is an anxious time. And this is an antidote to that.”

Will & Grace airs on Thursdays at 9 p.m. ET/PT on Global.