Alberta couple home after being stranded in St. Maarten after Hurricane Irma

A Sherwood Park couple is home after being holed up in their apartment bathroom and then stranded in St. Maarten, one of the Caribbean islands hit hardest by Hurricane Irma.

Brad Radke and Nadine Michael were in St. Maarten for a work incentive trip when the Category 5 storm hit the island on Sept. 6.

“It puts a lot of things into perspective for me about what real problems and real struggles are,” Michael said.

The couple were renting a condo at Princess Heights on the Dutch part of the island. The concrete building was up high on a hill and had hurricane shutters.

“I felt fortunate, on a hill up high, whereas some others weren’t as fortunate,” Radke said.

Spoke to Sherwood Park couple who were stranded in St. Maarten. Here's photos of their condo after #HurricaneIrma hit. They hid in bathroom. pic.twitter.com/mNkphOFxpk

However, Hurricane Irma proved too strong for their condo and ripped off the front doors.

“The air coming through … was just wreaking havoc in the whole condo. It was just that wooden door between us. We were holding tight,” Michael recalled.

The couple ended up hiding in the bathroom and then the bedroom closet, waiting for the storm to pass.

“You can imagine, we had our feet on the toilet and our backs against the wall trying to brace the door,” Radke said. “The door was moving four or five inches and water [was] leaking under the door.

“That was the scariest part. I thought if the door opened, I didn’t know what would happen. [It could] suck us out, [or] throw us around.”

“It was terrifying at that stage,” Michael added. “I thought, ‘We’re going to hold this door as long as we have to, just to make sure that we stay safe.'”

Radke and Michael said they consider themselves lucky. Their building had a generator, which meant the power was turned on for two hours each day. They also had access to running water for 30 minutes each day. 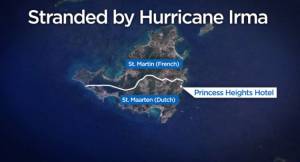 However, they felt stranded and didn’t know when they’d be able to leave the island.

“We had a finite amount of food. We didn’t have tons of water. No service. No connection,” Michael said.

“We thought, worst-case scenario, we’re stuck in this for a month.”

Finally, four days after the storm hit, U.S. military planes were deployed to rescue the evacuees. However, initially the couple was told they wouldn’t be able to board.

“About three or four hours into the lineup, they said unless you’re a U.S. citizen, you need to go back onto your bus — you’re going back to your hotel, we’re not taking you today,” said Radke.

Despite the uncertainty, eventually the couple did board a U.S. military plane and flew to Puerto Rico.

“We were [on] the very last plane. All the Americans went first and then just us leftovers got on the final plane, which we were very grateful for,” Michael said.

They arrived back in Alberta on Friday, but have yet to locate their luggage.

Here are before and after pics of the pool at their hotel #HurricaneIrma #StMaarten #yeg pic.twitter.com/jvd7htIOXG