What was supposed to be a quick pit stop at a local Canadian Tire has left a Winnipeg mom angry and speaking out.

On Friday, Stephanie Stachowich was trying to go shopping at the Regent Avenue location to buy a few items.

She had her two daughters, 3-years-old and 7-months-old, with her and was carrying a diaper bag filled with necessities along with her keys and wallet.

“As I walked in I saw a staff member spot me right away,” Stachowich told Global News.  “She simply told me straight out I could not bring my diaper bag into the store.”

Stachowich said there were no signs regarding bag policies posted and she wasn’t given a choice to have her bag searched or checked. She was simply told the diaper bag was not allowed in the store.

RELATED: Canadian Tire admits 5 days after breach customer info may have been ‘accessed’

“I was shocked. I have my wallet in there and my keys. I don’t have a separate purse,” she said. “I felt like they were judging me…like I was a criminal going to do something.”

When Global News went by the store Tuesday, signs had been placed outside the entrance to the store stating “all bags must be checked at customer service.”

However, whether that means bags were being checked by a staff member or if the customer had to leave their bag at customer service was unclear.

Canadian Tire management refused to explain its policy and declined an interview.

The Manitoba branch of the Consumers’ Association of Canada said policies like this are a mechanism to prevent shoplifting and widely vary based on the store.

“Some stores have racks right at the doors where you deposit your bags,” Consumers’ Association of Canada (Manitoba) Executive Director Gloria Desorcy said. “Some stores you’ll hand (the bag) over and they’ll tape it shut. (Others) take it to customer service. They all have different policies.” 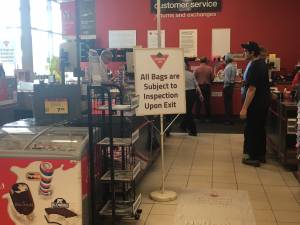 Desorcy said in situations such as this, consumers have the right to voice their opinions and make sure they are heard.

While Stachowich said she has no problem abiding by store policies or having her bags and receipt looked at, but she believes this particular policy is far too strict.

“Check our receipts at the door… (that’s) not an issue,” said Stachowich. “I have no problem opening my diaper bag and showing you what’s inside (but) I think the policy they are trying to enforce is not making it easy for young families.”