Canadian babies are heavier and taller than global standards. Here’s why

Canadian babies are bigger in weight and height than the world’s average standards, a new study suggests. But parents shouldn’t be worried – healthy Canadian babies may just be larger in size.

“It is substantial. I wouldn’t call it alarming but it’s really notable. Our kids are generally heavier and longer at most points of their first two years of life, but especially once they get past nine months of age,” Dr. Joel Ray, the study’s lead author, told Global News.

Ray is a clinician physician at ICES and St. Michael’s Hospital. He’s studied natural growth in babies in utero and in the early stages of life.

“We’re using WHO curves as standards for growth in Canada, so we’re really using a yardstick, a measurement of height and weight that may not be reflective of natural growth of Canadian kids. Our kids may be at times bigger in height and weight but we may be calling them excessively big when they may just be appropriately growing,” Ray said.

In 2006, the WHO unveiled its child growth standards, or CGS, which measures the optimal growth of children. Its estimates stem from a large-scale study that followed the growth trajectories of babies from Brazil, Ghana, India, Norway, Oman and the United States. 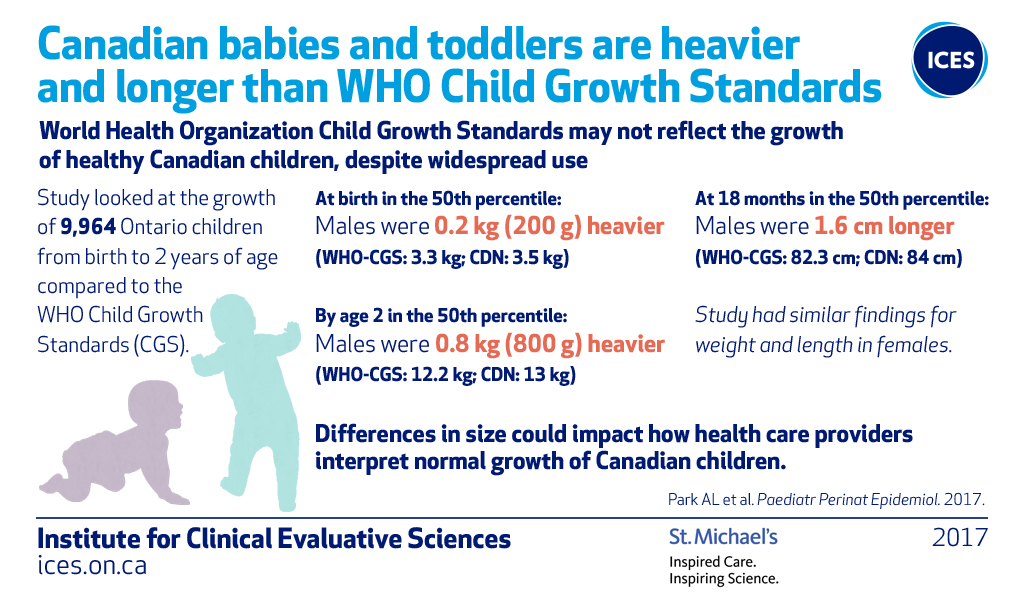 For his study, Ray looked at nearly 10,000 babies in Ontario from birth to two years old. The parameters of his research matched the WHO’s: moms stuck to exclusive breastfeeding to age 24 months, they were non-smokers, had no serious medical conditions and no birth defects.

Turns out, on a whole, Canadian babies are larger than the WHO cohort.

READ MORE: Why your child’s weight in grade 5 could predict future obesity risk

“Babies from a European Western ancestry are clearly the ones who are most notably bigger in height and weight. Bigger doesn’t mean bad or better, it’s just a descriptor,” Ray said.

“It’s just plain old genetics. We also live in a different society than the other six countries – we have differences in nutrition, climate, children may be growing up different in Canada in their natural environment,” Ray said.

The guidelines are now used across Canada by family doctors, pediatricians, registered dietitians and other frontline health care workers when measuring children’s growth.

Ray’s concern is that doctors may be advising parents to change their feeding patterns because their babies may be larger — or smaller — than WHO norms. Each time parents take their babies in for a checkup, their weight and length are recorded.

“We may be targeting kids who are not obesity-prone. They’re literally just structurally bigger. Some kids are still being called small but are simply growing appropriately,” Ray said.

It’s a slippery slope, Ray said. He said doctors could be referring parents to specialists or dietitians to help with feeding kids when it isn’t necessary. There’s added stress on the family, too.

Ray said that, for now, there is no “barometer” for accurately predicting which babies and toddlers could be at risk of obesity later on in life. But Canada shouldn’t phase out the usage of WHO guidelines either.

His full findings were published Tuesday in the journal Paediatric and Perinatal Epidemiology.