Severe thunderstorm warnings, watches dropped for much of central Alberta

UPDATE: The watches and warnings were dropped on Saturday night

Much of central Alberta, including Edmonton and Calgary, was under severe thunderstorm watches and warnings Saturday afternoon as a storm cell sweeps across the province.

Environment Canada confirmed a tornado touched down Saturday near the Paddle River Dam, which is located in the Sangudo area south of Mayerthorpe. No damage was reported.

As of 4:30 p.m, two warnings were in place around Calgary.

The national weather agency said shortly after 4 p.m. the thunderstorm was located 35 kilometres south of Olds and was moving to the east at 40 km/h.

South of Calgary, the agency was also forecasting a similar severe thunderstorm, located 40 kilometres west of Claresholm and moving to the east at 25 km/h.

Elsewhere in central Alberta and closer to Edmonton, Environment Canada said conditions were favourable for the development of severe thunderstorms that may be capable of producing strong wind gusts, large hail and heavy rain.

The potential for severe thunderstorms will continue into the evening, the weather watch said.

As of 4:45 p.m., watches and warnings were in place for the following areas: 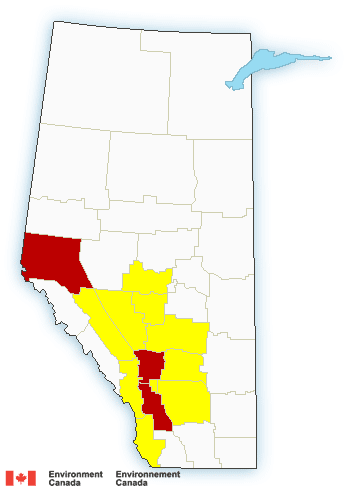 Environment Canada issued a reminder that large hail can damage property and cause injury, and severe thunderstorms can produce tornadoes.