Many Canadian characters in film and TV are usually based on the following stereotypes; we’re polite, friendly and love Tim Hortons.

Canadians are also well known on the big screen for their love of hockey, beer and maple syrup.

Robin Scherbatsky from How I Met Your Mother

Robin Scherbatsky (played by Canadian actress Cobie Smulders) moves to New York City to pursue a career in media and even though she has dual citizenship in Canada and the United States, she’s always being mocked for her Canadian roots.

Robin’s character plays off some Canadian stereotypes during the show: she loves hockey, beer and she takes Barney to Tim Hortons when they visit Canada.

In one episode, Robin’s friends learn that she was once a Canadian pop star called, Robin Sparkles. The pop star made her debut in season 2 of the show with her first song, Let’s Go To The Mall.

More of Robin Sparkle’s music catalogue appears throughout the show. In season 6 audiences discover that after her singing career, she transitioned into television.

When one of Robin’s childhood friends visits, he asks her if it was somebody she went to Degrassi with.

READ MORE: Here are our 10 picks for Canada’s greatest brands of all time 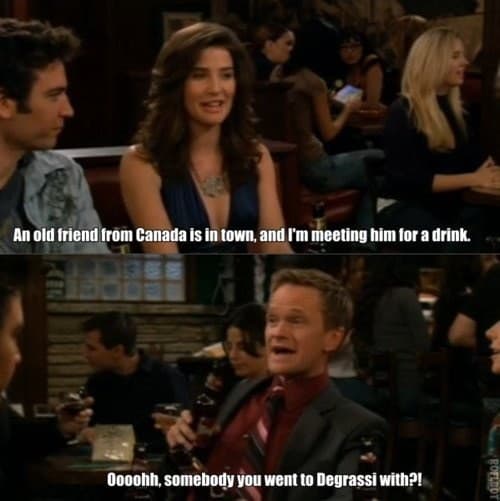 In one episode, the cast makes a bunch of Canadian jokes while imagining a “Canadian wedding.”

“Canada? Are you registered at Tim Hortons?” Ted asked.

“Canada? What do we ask on the wedding invitation, will you be having the elk or the moose?” Barney asked.

“Canada? What, are you going to walk down the aisle wearing snow shoes?” Lily asked.

“Canada? What, is everyone going to have access to universal healthcare so no one has to choose between going bankrupt and treating a life-threatening illness?” Marshall asked.

When Robin and Barney are planning their wedding, Barney suggests that he would put an end to the Canadian wedding jokes… if Robin asks in English and in French. 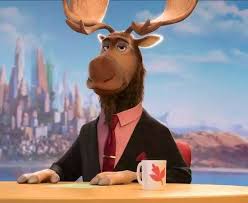 Disney made CBC’s chief news anchor Peter Mansbridge the voice to newscaster Peter Moosebridge in one of its recent animation movies, Zootopia.

Peter Moosebridge is the co-anchor with antlers that appears on “Zootopia News” in the Disney film.

Peter Moosebridge is only seen as the co-anchor in versions of the Disney film in Canada, U.S. and France. The co-anchor changes to represent a favourite animal from different countries of release.

In the United Kingdom, the moose is replaced by a corgi, which is the dog of choice of the Queen. Japan has a tanuki, a Japanese raccoon dog. Australia and New Zealand have a koala bear and China has a panda.

Degrassi is a Canadian TV drama franchise that follows the lives of teenagers who attend school on De Grassi street in Toronto, Ontario.

Degrassi Junior High aired for 42 episodes from 1987 to 1989, with much of the cast continuing over into the spin-off series, Degrassi High which aired from 1989 until 1991.

Degrassi: The Next Generation was revived in 2001 and dealt with more topics including online predators, suicide, censorship, gangs, self-harm, school shootings and much more. Toronto rapper Drake began his career on the show as Jimmy Brooks, who was left very bitter and on edge when a school shooting left him crippled from the waist down.

Over the years, the show has featured Toronto’s street cars, De Grassi Grocery, Shoppers Drug Mart, University of Toronto and many other known Toronto locations. 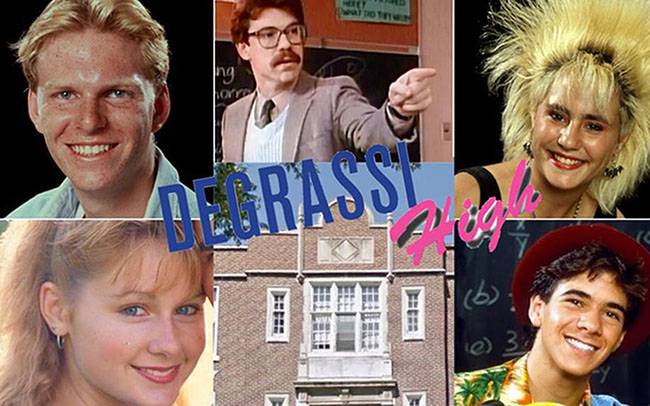 Wolverine is one of the most famous fictional Canadian characters.

He has claws that come out of his fists and has been a comic book star for decades.

Wovlerine, also known as Logan, was born as James Howlett in Cold Lake, Alberta, Canada and can be ferocious but also good-hearted.

He is a mutant who has animal-keen senses, enhanced physical capabilities and a powerful regenerative ability known as a healing power.

Hugh Jackman plays the Canadian character in the live-action films. The third standalone Wolverine movie, Logan, was released on March 3, 2017.

The film represents a sendoff for both Jackman and Sir Patrick Stewart as Professor X, who first portrayed these characters on the big screen in Bryan Singer’s original X-Men film 16 years ago. 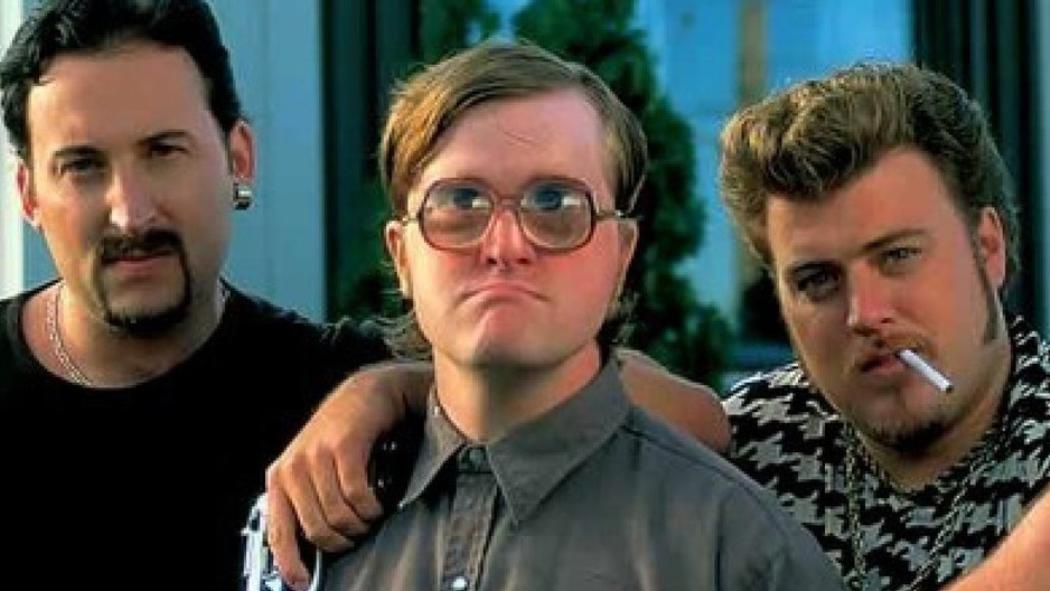 Trailer Park Boys is a Canadian mockumentary TV series that focuses on the misadventures of Ricky, Julian and Bubbles, who live in the fictional Sunnyvale Trailer Park in Dartmouth, Nova Scotia.

The episodes revolve around trailer park residents trying to make money through petty crimes while avoiding the police.

Their tactics are usually complicated by the park’s alcoholic supervisor, Jim Lahey, and his assistant, Randy.

The show seems to mock poverty in Canada and attempts to give viewers the impression that they are watching the lives of real Canadians and their experience.

Trailer Park Boys is similar to other reality TV shows where a camera crew follows the cast as they go about their daily lives and also features one-on-one interviews with the camera crew.

The Trailer Park Boys have their own brand of liqour, called “Liquormen’s Ol’ Dirty Canadian Whiskey. You can purchase it at stores across Canada.

Dudley Do-Right from The Rocky and Bullwinkle Show

He is a Canadian Mountie who is always trying to catch his nemesis, Snidely Whiplash, and rescue damsel in distress Nell Fenwick, his boss’s daughter.

He usually succeeds only by luck or through the actions of his horse named, “Horse.”

There was a live-action film released in 1999, starring Brendan Fraser as Dudley and Sarah Jessica Parker as Nell. The movie received negative reviews and was a box-office failure, despite it’s budget of $70 million. It made less than $10 million domestically.

READ MORE: Here’s why you can thank one Canadian for the invention of AM Radio

Seth Bullock was born in Amherstburg, Ont., to British Major George Bullock and his Scottish wife, Agnes Findley. He left home at 16 and ended up in Montana.

He eventually became a marshal in Montana and heard stories of gold in Deadwood. Bullock left his job as marshal to establish a hardware business in the gold-mining camp of Deadwood, along with his friend and business partner, Sol Star.

He became sheriff of Deadwood after teaming up with Bill Hickok to investigate the massacre of the Metz family. Bullock found himself romantically involved with Alma Garret, despite the arrival of his wife and children.

Timothy Olyphant plays Seth Bullock on the HBO show but that character is based off of a real person.

READ MORE: Canada 150: Could you pass the Canadian citizenship test?

Justin Timberlake in The Love Guru

Jacques is the star French-Canadian goaltender of the LA Kings and the main antagonist in the 2008 comedy film.

His character sings songs by “the greatest singer ever from Québec, Miss Céline Dion” and offers his house guests a “Québec pizza” which consists of a pop tart with ketchup.

Margaret Tate in The Proposal

Margaret Tate (played by Sandra Bullock) is an executive editor in chief of a book publishing company in New York City. After she finds out that she’s being deported back to Canada because she violated the terms of her work visa, she persuades her assistant, Andrew Paxton (played by Canadian actor Ryan Reynolds) to marry her.

She threatens Andrew and tells him that if she is deported he will no longer have a job and he’ll be set back in his dream of becoming an editor.

A U.S. immigration agent informs the pair that he suspects they are committing fraud to avoid Margaret’s deportation and tells them that they’ll be asked questions about each other separately.

If their answers don’t match up, Margaret will be deported to Canada permanently and Andrew will be convicted of a felony.

READ MORE: Could this be the year that Canada finally recovers from its 15-year tourism slump?

Bob and Doug McKenzie from SCTV 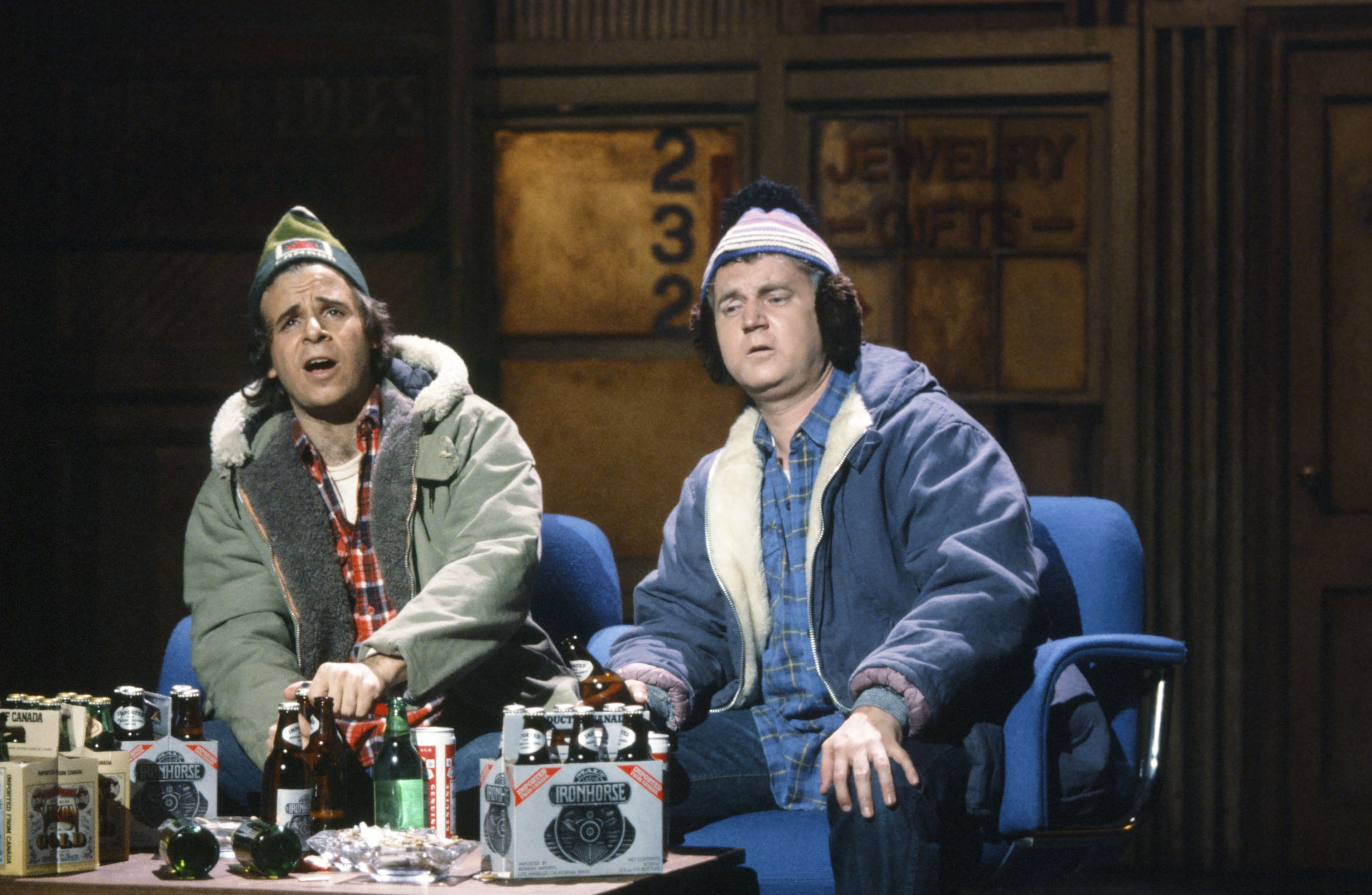 The skit was created originally to mock CBC Television for their Canadian content demands but the brothers quickly became a pop culture phenomenon.

The two brothers wear heavy winter clothing and toques, while drinking beer and commenting on various Canadian life and culture. The duo had a total of 41 segments on SCTV. 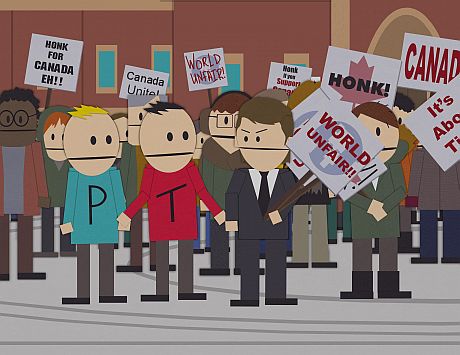 The children of South Park love to watch Terrence and Phillip in their Canadian TV show. Terrance is from Toronto and Phillip is from Montreal.

“Phillip is Terrance’s best friend. They live together in Canada where they eat Kraft dinner and make fart jokes,” according to southparkstudios.com.

Did we miss any other uniquely Canadian characters in film and TV? Let us know below.