Fake news: No room in the stadium, Brad Pitt moving to Brantford, the War on Christmas and more

Here’s a roundup of things that didn’t happen this week, or at any other time:

The Centerville Elementary School in Lancaster, Pa. cancelled ‘A Christmas Carol’ because of theWar on Christmas.

Folks, there is no war on Christmas. One sign of this is that people who enjoy the fantasy of there being one have to scrape very hard to find any material.

Take, for example, the Centerville Elementary School in Lancaster, Pa.’s decision to cancel ‘A Christmas Carol,’ originally planned as the Grade 5 play. The school decided that organizing the play would take too much time, though it had been performed in the past.

Then the culture warriors got hold of the controversy, saying that complaints about the words “God bless us, every one,” which as you may remember end the book, was the real reason behind the play’s cancellation. You can read this version at The Blaze, therightscoop.com, Breitbart and elsewhere.

The local school district has since been forced to publish an FAQ about the decision, which you can read here.

Breitbart’s comment section on the story alarmed a Jewish family with a child at the school to the point that they fled the county, the Philadelphia Inquirer reported. However, the Anti-Defamation League said it had checked out that report and found that the family had actually gone on vacation. The Washington Post spoke to a local rabbi who confirmed that the child was blamed, in some quarters, for the play being cancelled.

The Breitbart comments include what appears to be the principal’s home address, and multiple demands for the family’s address.

The school district says complaints didn’t lead to the play’s cancellation, and in fact there were no complaints in the first place.

Though, as the New York Times points out – to the extent there ever was a war on Christmas, it was waged by the very same Puritans who we saw recently at Thanksgiving. Puritans saw the revelry of Christmas – and, especially, its tradition of subversion of hierarchy – as a distraction from religious zeal, and did their best to crush it.

Buzzfeed published a feature this week on a network of interlinked fake news sites that were industriously pumping fake stories in an odd niche – fabricated explanations why a celebrity was moving to a specific community.

The hope seemed to be that any given story would be viral in a specific place, without readers knowing that a variation was also viral in another place.

The sites are named to give them a bit of broadcast news credibility – channel17news.com, for example. (They’re the fake TV cousins of  online fake newspapers like the Baltimore Gazette.)

So why is Brad Pitt moving to the Telephone City? dailynews11.com explains:

“I’m just tired of the L.A. lifestyle and I feel like, at this point in my life, I’d rather just live in a place full of real, genuine people. I’ve been to Brantford, Ontario a couple of times over the years and the people there are real.”

“I’m not retiring, I’m just looking for a change in life and I think I’ve found that in Brantford,” Pitt quite certainly did not say.

Googling “I’m not retiring, I’m just looking for a change in life and I think I’ve found that in” gives you a bewildering assortment of celebrities and their supposed new homes, along with debunkings by real news outlets across the English-speaking world. (Buzzfeed says it’s identified 342 variations on the formula.)

The North Devon Journal, for example, told its readers that despite reports to the contrary Justin Timberlake was unlikely to move to the area, in the southwest of England:

“According to a link shared by hundreds across the county last night the star is ‘looking for a change in life’ and has found it in Exeter – of all places.”

(For what it’s worth, the poll’s methodology has been criticized.)

Did Trump claim to have won the popular vote? Sort of:

In addition to winning the Electoral College in a landslide, I won the popular vote if you deduct the millions of people who voted illegally

On Sunday, thefederalistpapers.org argued that Donald Trump won the popular vote if you leave California out of the count, an argument that’s statistically true but transparently silly.

If the election were based on total popular vote I would have campaigned in N.Y. Florida and California and won even bigger and more easily

But the idea that Donald Trump won the popular vote if only … something, seems to have taken hold in some quarters.

The Independent reports that a top-ranked result in a Google search for “final election results” in the aftermath of the U.S. election was a link to 70news, a fairly low-rent site that claimed Trump had won the popular vote.

Post-U.S. election anxieties may have found their expression in two fake news stories refuted by Snopes: that Trump’s victory tour would include a rally at Moscow’s Red Square, and that a sighting of a Russian flag at the Texas legislature was an ominous sign of foreign influence (the flag was real, but a prop in a protest.)

No room in the stadium

The NFL’s Minnesota Vikings’ new stadium in Minneapolis is several things: quite beautiful, warm, despite Minnesota’s pitiless winters, because of a glass roof, and controversial due to its US$1.1B price tag, much of it covered by the state’s taxpayers.

So when Minneapolis saw record cold temperatures last week, it occurred to two residents with Twitter accounts that it would be a good idea to open the stadium to the city’s homeless. In a move one later called ‘misguided,’ they decided to tweet that it actually had been. As these things sometimes do, it went viral.

Those tweets have been deleted, along with one of the men’s accounts, but the other, David Dellanave, offered an explanation:

Tweet deleted. Point was to highlight a social issue and waste of taxpayer money that could help people instead of make private profits 1/3

Folks who think homeless plight is a joke punchline don’t get it at all. The “punchline” is an empty taxpayer-funded warming house.

You guys are actually more mad that someone MADE UP the idea that the stadium would be used to keep homeless warm, than the fact it’s NOT?

I'm sorry if this obviously misguided attempt at highlighting a social issue hurt anyone. Didn't think a tweet would go so far & I regret it

Misguided or not, the hoax quickly made its way into mainstream sports media: CBS Sports and Yahoo Sports (links are to Google’s cache) both picked up the the story: 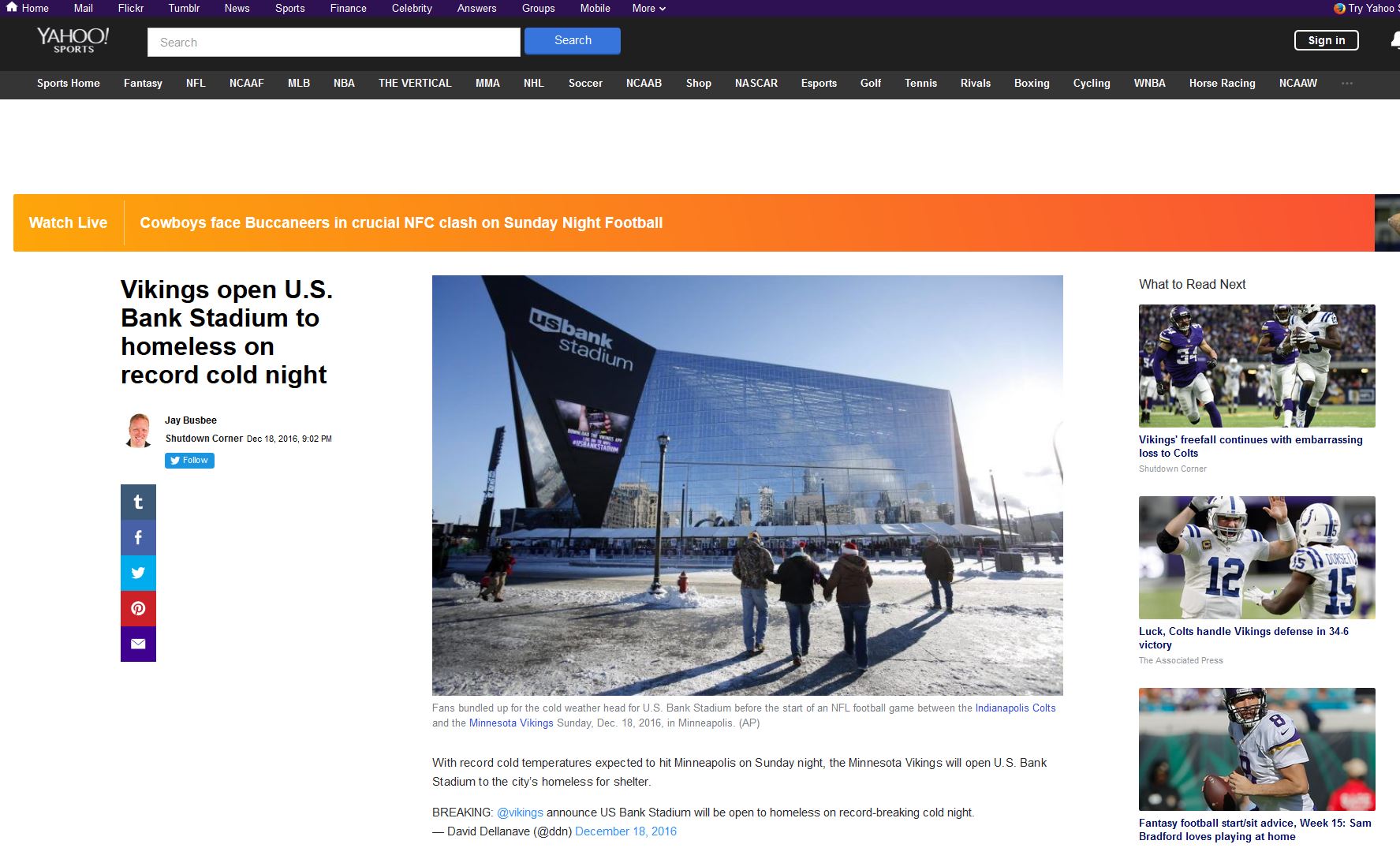 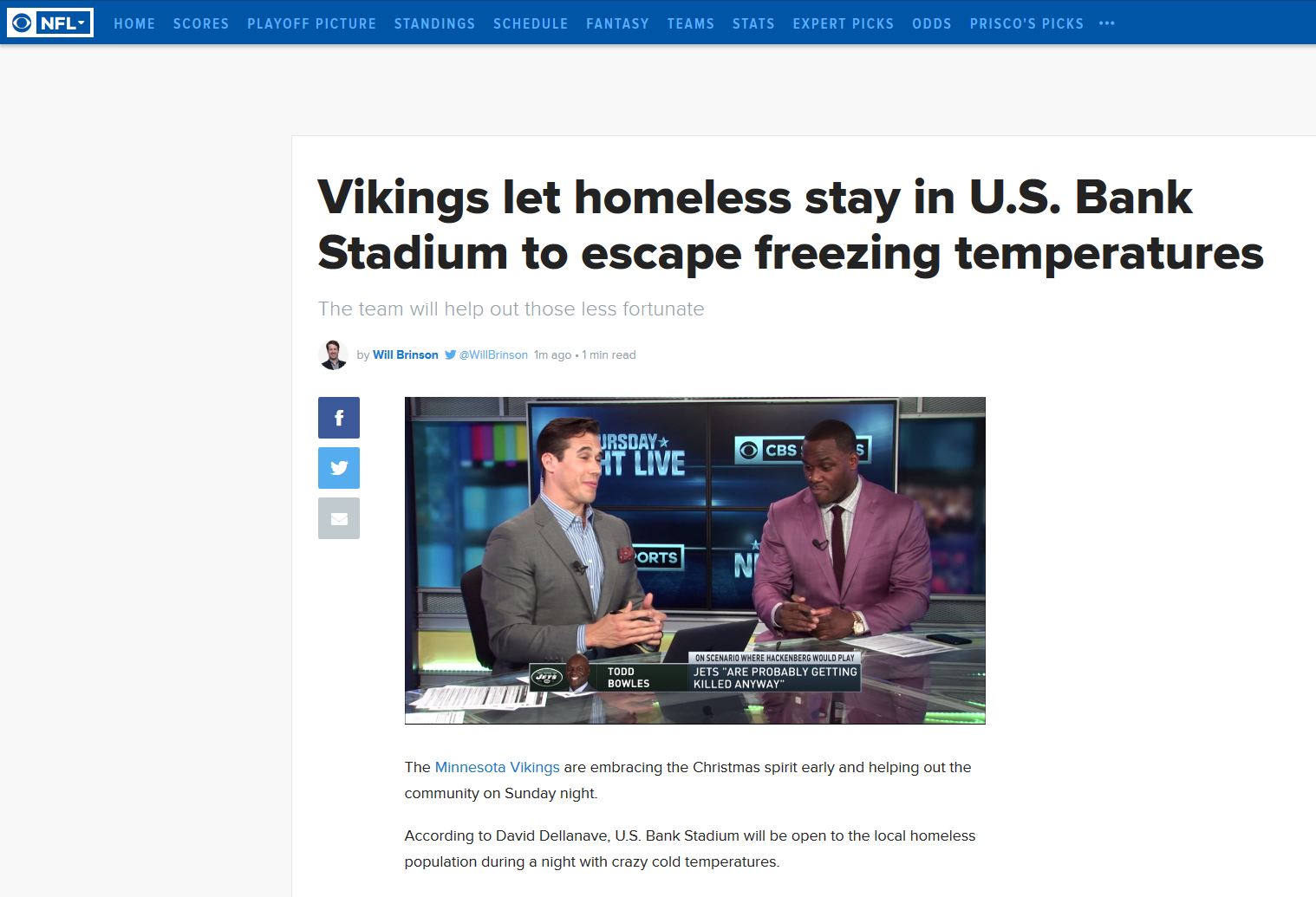