Feisty and opinionated, this spunky senior does things her own way. She takes her Christian faith very seriously and was determined to literally get branded for her belief.

Christine Nagel, 81, got a tattoo that reads, “don’t euthanize me.”

“It’s drastic but life to me is so precious.” 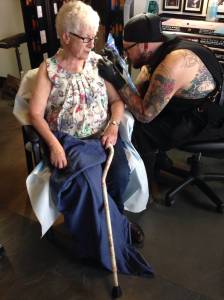 Nagel is against Bill C-14, the legislation that now allows Canadians to legally apply for doctor-assisted deaths.

READ MORE: Dozens of Albertans have used doctor-assisted death since it was made legal

Nagel believes when it’s her time — nobody should interfere.

“How would you feel if you turned up at the gates and St. Peter said, ‘just a minute we weren’t expecting you for another 18 months?'” Nagel laughed.

“She doesn’t want to be thrown away.”

“She made this decision when her mind was clear and I couldn’t go against her wishes,” Juliana said.

And there will be no way anybody could ignore that ink.

“If you want to pass a message on, put it on you,” Christine Nagel said bluntly. “They’re gonna find it. It’ll be staring at them blank in the face.”