Between 200,000 and 250,000 litres of crude oil and a lighter hydrocarbon have leaked into the North Saskatchewan River upstream from North Battleford, Sask. The city draws its drinking water from the river and shut down its intake Friday because an oil slick was spotted downstream from the community.

Here’s a list of some spills of oil and other materials on the Prairies in recent years:

June 2016 — An estimated 380,000 litres of light petroleum leaks within five kilometres of a grizzly bear management zone in northwestern Alberta. Owners ConocoPhillips Canada and Paramount Resources say the leak of condensate, a liquid produced with natural gas, is from a gas plant near Grande Cache. No one is found living in the area and there’s no evidence of animals or fish hurt by the spill.

July 2015 — Five million litres of bitumen, sand and water mixed together spill into muskeg at Nexen Energy’s Long Lake oilsands project near Fort McMurray, Alta. The company concludes the pipeline rupture that led to the spill went undetected for about a month before it was discovered by a contractor. Nexen says the pipeline was not designed properly for muskeg conditions. 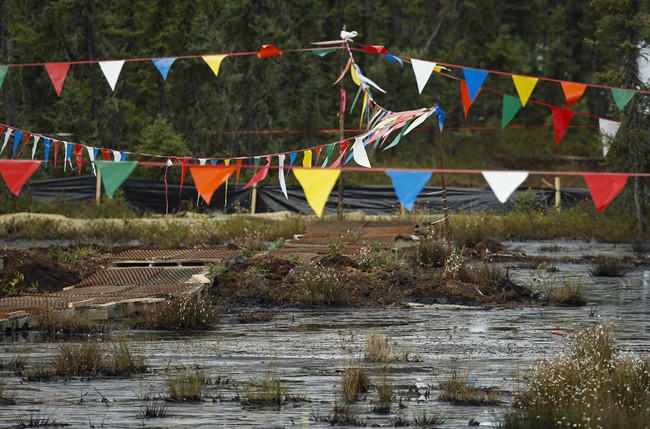 March 2015 — About 2.7 million litres of condensate used to dilute heavy oil is discovered near the muskeg’s surface at Murphy Oil’s heavy oil site, 80 kilometres northeast of Peace River, Alta. The company says the spill occurred over an extended time period. No harm to wildlife is reported.

November 2014 — Canadian Natural Resources says a mechanical failure led to a spill of 60,000 litres of crude oil near Red Earth Creek in northern Alberta. The company says most of the spill was contained on the company’s land and a nearby pipeline right of way. No report of harm to wildlife.

April 2014 — A pipeline owned by Canadian Natural Resources spills 70,000 litres of oil and processed water northwest of Slave Lake, Alta. The spill is described as not being near any people, water or wildlife.

July 2013 — Canadian Natural Resources identifies four sites where a bitumen-water mix has been seeping from an old well at the company’s oilsands project on the Cold Lake Air Weapons Range. At least 1.5 million litres of bitumen is recovered. At least 100 animals die. The Alberta government issues environmental protection orders and limits the amount of steam CNRL pumps into the reservoir.

May 2013 — An Apache Canada pipeline in the Zama City region of northern Alberta leaks 15 million toxic litres of process water heavily contaminated with salt. Another 1.8-million-litre leak of waste water is discovered the following October.

June 2012 — Some 461,000 litres of oil from a Plains Midstream pipeline leaks into a tributary of the Red Deer River in central Alberta from an underwater pipe cracked by high water flows. Gleniffer Lake, a man-made reservoir popular with water recreationists, is closed for nearly three weeks. A marina and campground are also closed, fishing on the river is shut down and drinking water is trucked in for people. The province’s regulator concludes the line had not been adequately inspected.

May 2012 — A leak that goes undetected for days from a Pace Oil and Gas waste disposal line releases about 3.5 million litres of a water-oil emulsion into muskeg near Rainbow Lake close to the Alberta-Northwest Territories boundary. It is discovered when an aircraft from another oil company makes a routine flyover.

April 2011 — A poorly welded and highly stressed section of the Rainbow pipeline owned by Plains Midstream cracks and spews about 4.5 million litres of oil into low-lying marshland near the northern Alberta aboriginal community of Little Buffalo. A beaver dam prevents oil from spreading beyond the spill site. School in Little Buffalo is cancelled for several days over odour concerns. Damage is described in court as significant.

April 2007 — A rupture in a pipeline belonging to Enbridge Pipelines downstream of a pump station near Glenavon, Sask., spews about 990,000 litres of crude oil into a wetland area of farmland. About 912,000 litres is recovered. There are no injuries.