Corrections Minister Yasir Naqvi is “concerned” that Ontario inmates are being put in solitary confinement because of their mental illnesses — but he won’t commit to ending the practice entirely.

“I am very concerned” about documents showing the extensive use of mental illness as a reason for segregating inmates, Naqvi said Tuesday.

“I do recognize that could have adverse impacts on the individuals. We need to do a better job in ensuring we are providing the appropriate mental health supports.”

But he wouldn’t commit to stopping it.

“We’re still doing a consultation, talking with our partners, our frontline staff. And we’re going through a fair bit of information that’s available to us.

“But our objective is to ensure that if segregation is used in the future, that it be a last resort.”

Naqvi is in the middle of a review of whom Ontario puts in segregation, why and under what circumstances. His ministry is calling for feedback but he hasn’t put a hard timeline in place.

“I think it’s incumbent on us to get this right.”

As part of that, he said, he’s looking at recommendations from inquests into the deaths of Ashley Smith and Edward Snowshoe. He has met with United Nations representatives on the human rights concerns surrounding segregation. But he has no plan to adopt the UN’s cap of 15 days of solitary confinement. Any more than that, the UN considers torture.

In the meantime, Officers in Ontario’s jails and the people signing off on their decisions are breaking the province’s own rules — and breaching human rights settlements made three years ago — on who can be placed in solitary confinement and what kind of care people with mental illness should get.

DEATH BEHIND BARS: Canada’s sickest inmates are in its deadliest prisons

As Global News has reported, Ontario correctional officers put people in solitary confinement because of their mental illness.

Others are more direct: Mental illness (shortened to “MHI,” “Mental Health Issue”) is cited as the reason for putting a Central East Detention Centre inmate in segregation on March 7, 2013. 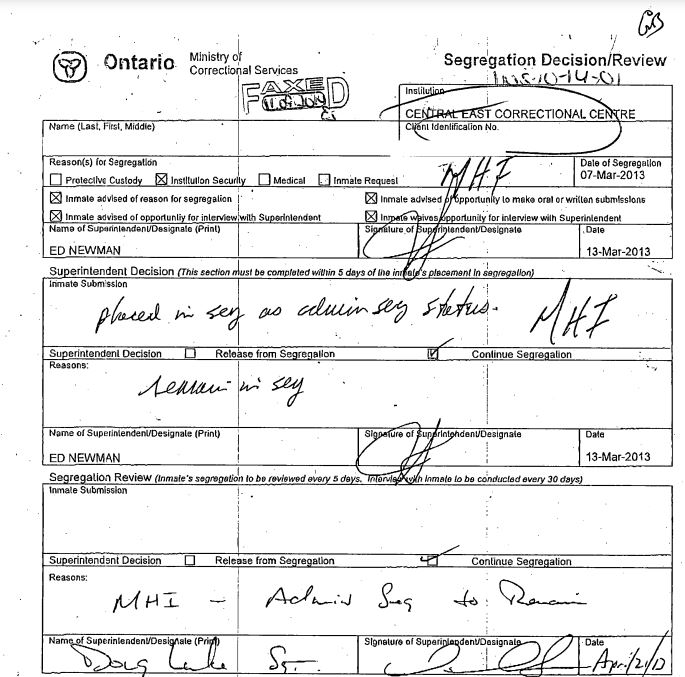 The same reason was cited 100 days into his segregation; hundreds of days later, his “vulnerability” and “protection” were also cited, along with statements that he had asked to stay in solitary confinement.

“Is there a signed request on file to remain in segregation?” a supervisor asked, about 440 days in. There wasn’t. “Did he make an oral statement? If so, what was it?” In the documents following, no oral statement is mentioned.

Around 450 days in, there’s mention of a psychologist’s visit. There’s also a reference to the inmate’s request to stay put “as per written submission”.

The sick inmate asked to remain in segregation, the documents say, for the remainder of his time at the Lindsay, Ont., jail. In September of 2014, after 545 days in solitary confinement, he was “transferred to the federal system.”

In theory, inmates are given the opportunity to make written or oral statements each time their segregation is reviewed.

In practice, it’s clear this did not always happen.

Many inmates reportedly “declined” to give written or oral submissions.

“Inmate states he has never done one of these statements in the years he has been in segregation,” one reads.

People described in these documents are put in solitary because they tried to kill themselves; because they went on a hunger strike; because they hurt their hand; because they fear for their safety; because they were beaten; because of gang affiliations or lack thereof; for misconduct (one inmate apparently “chest-bumped” a corrections officer); because of the nature of their charges, which often refers to child sexual predators.

One extended stint in solitary was chalked up in part to an “allergic reaction.” Another tested positive for tuberculosis and spent more than a month in solitary on medical observation, apparently awaiting additional care.

Some of these fall within the seemingly acceptable reasons Ontario inmates can be put in solitary confinement, according to a March, 2015 handout that’s supposed to go to all inmates (it isn’t, lawyers say).

But mental illness is not one of them.

This isn’t supposed to be happening any more.

The Ontario Human Rights Tribunal found that the province discriminated against Christina Jahn, a woman with mental illness and cancer who was placed in solitary confinement for 210 days at the Ottawa-Carleton Detention Centre.

In a landmark 2013 settlement the province committed to”changing its policies to only use solitary confinement or segregation for inmates with mental health disabilities as a last resort,” an Ontario Human Rights Commission summary reads.

Christine Johnson was one of Jahn’s lawyers.

“The act of putting people in solitary confinement because they have a mental health issue … in our mind, that’s discriminatory,” she said.

“We know that segregation is not going to help the situation for anybody. … It’s disheartening to see the practice of placing mentally ill inmates in segregation is continuing.”

But the talks Johnson and her colleagues have had with the ministry are encouraging.

“That culture is slowly changing,” she said. … It’s just a matter of changing that among people who are actually tasked with filling out those forms.”

WATCH: Questions around use of solitary confinement for people with mental illness

To really change things, Johnson said, you’d need “a broader reform of the system” that would give staff another place to put ill offenders — or at least far greater access to, and decision-making by, health practitioners.

In the meantime, Johnson says she’s gotten calls from many inmates who feel their rights were violated in the same way Jahn’s were — or who’d never been advised of their rights, even though that’s supposed to be mandatory.

“Those types of cases are always on our radar,” she said.

“We need to find a better way of diverting them and finding care for them in the community setting. … If someone has a health issue then there should be a health solution for them.”