EDMONTON- An Edmonton veteran is asking the federal government to streamline its processes so veterans don’t have to fill out as many forms to prove permanent disability.

Mast.- Cpl.  (Ret’d) Paul Franklin told Global News the pile of paperwork he has to fill out for different organizations on an annual basis is nearly a foot high.

“Every year I have to sign the forms, find the forms and write the forms saying I have no legs,” he said.

Franklin is a former medic who served in the Canadian Forces for 11 years. In 2006, he had just two weeks left in his six-month mission in Afghanistan when he became the victim of a suicide bomber.

“My buddy Jeff yelled ‘car right,’ so I shifted left and he (suicide bomber) detonated his car,” Franklin said about the attack. “Boom! We get hit with 56 kilos of explosives.”

Franklin lost both of his legs in the attack and said the care he received afterwards was outstanding.

“With my doctors and team, we changed everything,” the former medic beamed as he spoke about the progress that had been made while he was still in the military.

Franklin retired in 2009 and the paperwork piled up.

“You’d think a simple form you have to fill out every year… no problem.”

But that’s not the case. The veteran said he has to go to the doctor and have him fill out pages of paperwork after being put through a series of physical tests. The amputee said he also has to fill out similar forms for different government departments and the insurance company Manulife.

“There’s a lack of common sense. The organizations involved have to learn to start sharing information.”

It’s about more than just one person as well. Franklin wants all veterans with permanent disabilities not to have to fill out the forms again and again.

“They can send me a form that says ‘in the last year, has your medical condition changed?'” Franklin said, explaing that only if the answer is yes should someone have to go through the paperwork and doctor’s notes. If the answer is no, he wants it to be a simple process that just involves checking off a box, signing it and sending it in. 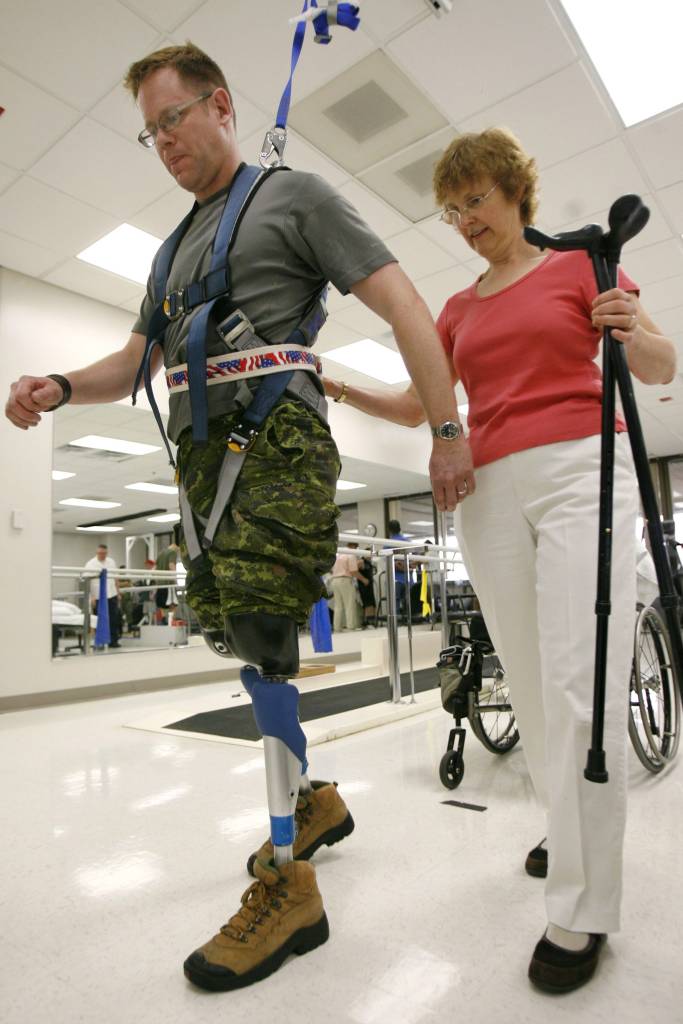 PHOTO ABOVE: Canadian Master Corp. Paul Franklin with his physical therapist, Bev Agur, of Edmonton, Canada, at Walter Reed Army Medical Center in Washington on Tuesday, April 24, 2007. Franklin lost both legs above the knee while serving in Afghanistan in 2006. He was Canada’s first war amputee since the Korean War.
(AP Photo/Jacquelyn Martin)

In 2015, the veteran went public with his story. The minister of veterans affairs at the time, Erin O’Toole, promised Franklin he would only have to fill out the forms every three years, but Franklin said he’s back to filling them out annually.

“The solutions are so easy and that’s why they aren’t being done,” the veteran said.

There’s a new minister in charge now, since the Liberal party formed government and Veterans Affairs told Global News the issue in question falls under the Department of National Defence and Minister Harjit Sajjan, a veteran himself.

The Department of National Defence said the program in question is the Service Income Security Insurance Plan, where injured members are eligible to receive coverage.  In a statement, a spokesperson told Global News part of Minister Sajjan’s mandate from Prime Minister Justin Trudeau, is bridging the gap with Veterans Affairs Canada to ensure Canadian Forces members and veterans get the care they need.

“We are a new government with a new mandate and these issues won’t be solved overnight,” Sajjan’s press secretary, Jordan Owens, said in a statement.

When asked about the annual forms and streamlining the process, the Department of National Defence said it’s an opportunity for them to flag any changes to a veteran’s condition “without leaving ill and injured members in a situation where they need to go out of their way to track down someone within the bureaucracy in order to get the assistance they need.”

The Department of National Defence said an announcement would be coming soon regarding the issues faced by veterans when it comes to red tape.