An Alberta cat has become an Internet sensation for her baby-cuddling skills.

The two-year-old adopted feline, named Panda, started to snuggle up to her new human before he was even born.

“When the belly got bigger, she started putting her paws around the belly so it looked like she [was] hugging it,” new mother Liel Ainmar Assayag told BuzzFeed News.
Story continues below advertisement

It is “very possible” for animals to sense their owners are pregnant, according to Jennie Willis, an animal behaviour instructor at Colorado State University.

She believes they might be able to smell the pregnancy hormone HCG — similar to how certain dogs have been known to detect changes in people’s body chemistry that help them identify seizures and sniff out cancer.

“We have yet to come up with a machine that is as accurate as the canine nose.”

READ MORE: Dogs pick up on cues to comfort the dying and the grieving

Animals may also respond to a pregnant owner’s changes in routine, or even the way they walk.

“As the owner is taking steps more gently and watching how they put their foot down … an intuitive animal is going to be sensing they need to go slower to keep pace with their mom.”

They might even be able to hear a fetus moving, Willis explains, because they hear low-intensity sounds than people can’t.

Whether or not your pet reacts to your pregnancy can depend on a variety of factors, including how close you are with them.

Assayag said Panda was always very affectionate with her. The cat is clearly enamoured with not only her owner, but also the family’s newest addition. 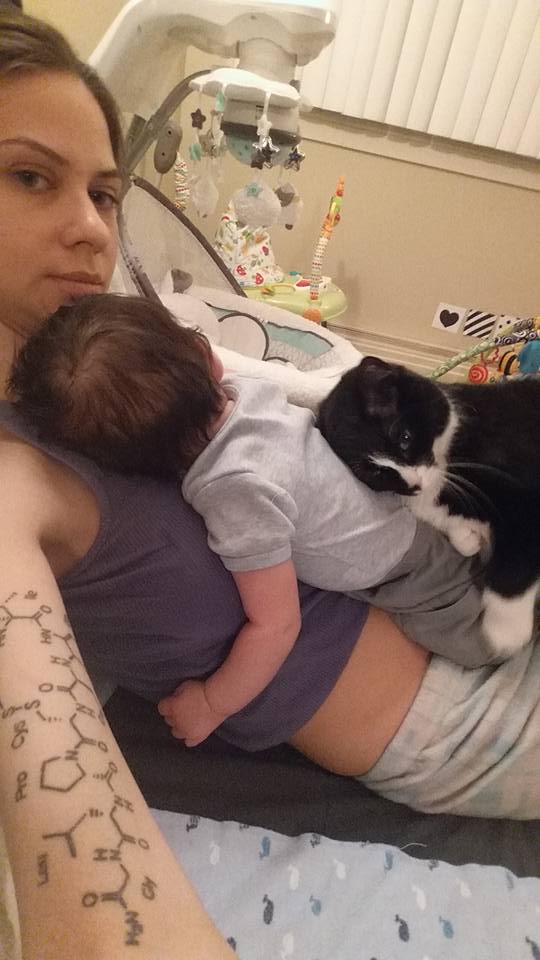 She’s not the only family pet to form a close bond with a baby.

Willis said there’s more anecdotal evidence to suggest dogs are even more intuitive than cats when it comes to sensing pregnancy.

back at it again #theoandevvie

Assayag hopes her story will show people that pets and newborns can happily co-exist.

“I see a lot of people abandoning their pets once there is a baby in the house, because they’re afraid that they will hurt the baby,” she told Mashable.

“I want to show the people that pets are great companions for kids and they can learn so much from them.”